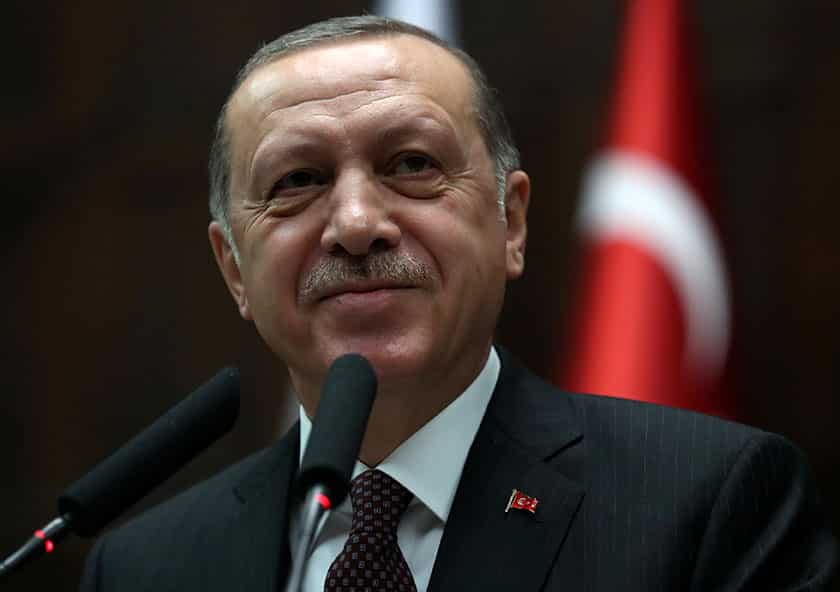 THE view of the blusterous President Erdogan that a significant obstacle to a Cyprus settlement was the Greek Cypriots’ insistence that Cyprus was a Greek island triggered the curiosity of a Turkish Cypriot, Ahmed, who decided to make his maiden visit to ‘South Cyprus’, and find out for himself whether the Turkish president’s claim was correct.

One morning Ahmed enters the free areas in his car through the Ayios Dhometios checkpoint. His plan is to go for a drive in his car as a prelude to his fact-finding mission. After a couple of minutes, he arrives at the Nicosia airport roundabout where there is a National Guard guardpost. There, he is stunned by what he sees. On the soldiers’ uniforms he sees the national emblem of Greece and not that of the Cyprus Republic, featuring a dove with an olive branch in in its mouth.

What surprises him even more is the banner next to the guardpost that says “Our borders are at Kyrenia.” His interpretation of the slogan is that the word ‘our’ indicates that the Greek Cypriots are dreaming of a unitary Greek Cypriot state even though they claim that the solution they seek is a bi-zonal, bi-communal federation (BBF). After all, if there is finally a settlement, the borders of the Greek Cypriot state would be marginally further north than the existing dividing line. This leads Ahmed to think that for Greek Cypriots to say that their borders are in Kyrenia is a blatant contradiction which, given that it is never disputed, consolidates Turkish Cypriot distrust regarding the reunification of the island as a bi-zonal, bi-communal federation.

Soon Ahmed arrives at the Kykkos monastery in Nicosia where he sees the two flags – of Cyprus and of Greece – flying side by side. This does not surprise him because he already knows that Greek Cypriot political correctness dictates that the Cyprus flag is always next to the Greek flag. What shocks him is that the Cypriot flag flies by the church, which clearly violates the constitution of the Cyprus Republic that supposedly safeguards religious tolerance. The really big shock is the mast of the Cyprus flag, which at its top has the Christian cross.

The message is very clear: Greek Orthodoxy is integrally bound with the Cyprus Republic and those of different religion, faith and ethnic origin have no place in it. A deeply disappointed Ahmed immediately returns to the occupied area. His fact-finding mission lasted just 14 minutes. Despite the brevity of his visit to the free areas, he gathered a wealth of information. Enough at least to tell his circle that “if Erdogan has said one truth in his life, it must be his statement about the Greek Cypriots considering Cyprus exclusively theirs.”

Let us now look at Ahmed’s experiences in relation to the thorny issue of political equality.  There is a strong suspicion that many – if not most – Cypriots do not know exactly what it is. I will try to simplify its definition. The quintessence of political equality – in the case of implementing a BBF – is that neither of the two constituent states would be able to unilaterally change the constitution or make agreements with other states.

Rejectionists refuse to accept political equality because they maintain the Turkish Cypriot constituent state will do exactly what Turkey commands which, admittedly, is a possibility. They argue that this is why political equality cannot be implemented in Cyprus. It is an argument that is rejected by all democrats, as well as the UN on which we depend to find a settlement.

How, then, do we tackle this situation? Rejecting political equality would mean permanent deadlock and the consolidation of de facto – and possibly de jure – partition. Therefore our only course is to approach the Turkish Cypriots, who are already a species under threat of extinction, with the aim of pulling them away, as a first stage, from the clutches of Turkey before the latter gobbles them up and, as a second stage, treat them like brothers as we are sharing a common country.

Do we have the will, bearing in mind that this requires a long and arduous effort? Do we have the desire to pursue the ‘Cyprification’ of our country, that is, turn it from a Greek Cypriot Republic to a Cypriot Republic? Will we have our own national (state) anthem? Would the Cyprus flag fly without the Greek flag by its side and without a cross at the top of the flag mast? Would religious tolerance be put into practice and not just into words? Would Ahmed visit Nicosia and feel he is in Cyprus?

In the economic field, does the desire exist to help raise the living standard of Turkish Cypriots by selling them for example electricity and water at a lower price than Turkey or by employing Turkish Cypriots in our businesses? In short would we be willing to help Turkish Cypriots reach our level of prosperity?

If the answers to these are affirmative, then Turkish Cypriots will cease being subjugated by Turkey. Only then would chauvinism decrease on both sides. Only then would the petrified zealots of partition flee. And most importantly, only then would favourable conditions for a settlement be created.