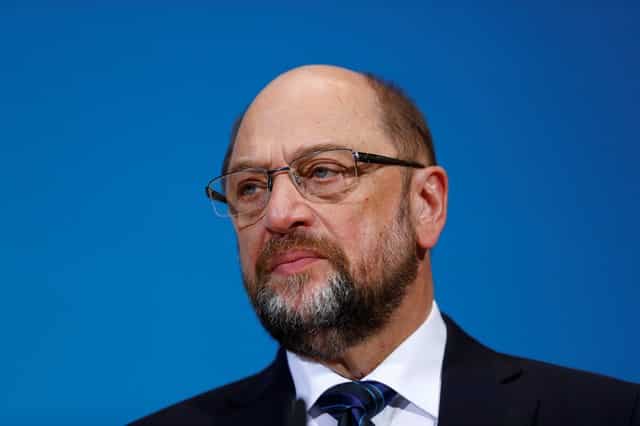 Senior politicians from Germany’s conservatives and Social Democrats (SPD) sought on Monday to shore up support for a deal on forming a coalition, after members of the centre-left party voted against it in one region.

With many among the SPD’s rank-and-file opposed to teaming up again with Chancellor Angela Merkel’s conservatives, the party’s national representatives will decide at a congress on Sunday whether to open formal talks on renewing the ‘grand coalition’ that governed Germany from 2013 to 2017.

SPD leader Martin Schulz was due in Dortmund on Monday to appeal for backing from members in North Rhine-Westphalia, which will contribute more than a quarter of the votes to the congress.

Many of the SPD’s grassroots supporters say the coalition blueprint it agreed last week with Merkel’s CDU/CSU alliance reflects too few of their party’s aims and that it should reinvent itself in opposition.

In remarks seemingly intended to appease opponents of the deal, NRW’s conservative state premier Armin Laschet said on Monday that the blueprint would be further refined .

But that concession seems unlikely to win over SPD activists in the state, who say the preliminary deal makes too many concessions, containing no pledges to raise taxes on top earners or abolish Germany’s dual public-private health insurance system in favour of a single “citizen’s insurance”.

If Schulz fails to persuade them, the talks could collapse, deepening the mood of political uncertainty that has gripped Europe’s largest economy and key power-broker since an earlier attempt by Merkel to form a three-way coalition with two smaller parties collapsed in November.

Schulz defended the draft, telling the RND newspaper network: “We pushed through a long list of points which will really improve people’s lives.” While the party had not got everything it wanted, “what we did push through justifies starting coalition negotitations.”

In inconclusive national elections in September, the conservatives lost votes to the far-right Alternative for Germany (AfD) party.

But the SPD performed even worse, notching up its worst result since the foundation of the Federal Republic in 1949. Opponents of the deal within the party say it would suffer even bigger losses in the next national election if it renewed the coalition.

On Saturday, youth activists rallied the SPD in the eastern state of Saxony-Anhalt into voting against a deal..

As a sweetener, senior SPD member Wolfgang Tiefensee suggested the party could demand a clause in any final coalition agreement that committed Merkel to calling a vote of confidence two years into the next government’s four-year term.

“Should everything work fine we will continue,” said Tiefensee, economy minister in the state of Thuringia. “If not, there will be a new election.”

Even if SPD delegates approve formal talks, a fourth term for Merkel is not guaranteed. Schulz has promised to put the terms of any deal to a vote by the 443,000 SPD members.

In trying to sell the deal, Schulz can point to lower taxes for low-income households who had traditionally formed the backbone of the party’s support base.

While opposing calls from SPD activists for the blueprint to be revised, NRW premier Laschet said it would be “refined and expanded” during the formal negotiations. “Ordinary people are saying: ‘Just form a government, stop this endless negotiation.'”

But any softening of conditions is likely to meet opposition from the Christian Social Union (CSU), the arch-conservative Bavarian sister party of Merkel’s Christian Democrats (CDU).

“I can’t imagine that we will substantially change the agreement reached in exploratory talks,” said CSU leader Horst Seehofer, dismissing the demands of a “worked-up” SPD.

Academy of arts and science launched