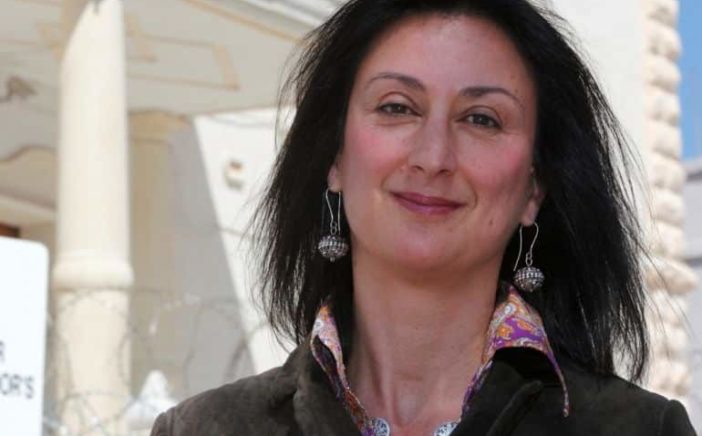 Maria Efimova, the source of murdered Maltese journalist Daphne Caruana Galizia, and for whom MEPs last month asked EU member states to grant whistle-blower protection, faces arrest if she comes to Cyprus in what appears to be an unrelated case.

Caruana Galizia was killed in a car-bomb attack in Malta on October 16. Efimova made headlines in August, three months before the assassination, when it was reported she had tipped off the murdered journalist that Michelle Muscat, wife of Malta’s Prime Minister Joseph Muscat, was the owner of Egrant Inc, a Panamanian offshore company.

Egrant Inc received money transfers from an account belonging to the family of the daughter of Azeri President Ilham Aliyev. The revelations unleashed a political storm in Malta in April, a month before the scheduled general elections.

In her Running Commentary blog on August 11, 2017, Caruana Galizia reported that Efimova, described as “the former Pilatus Bank employee who revealed that the bank kept in its safe two declarations of trust,” complained to prime minister Muscat about the harassment of her father in Russia.

Meanwhile, in an interview Efimova gave to Maltese journalist and blogger Manuel Delia this week, she said she was not the source of the information. She said that Caruana Galizia already had in her possession documents linking the prime minister’s wife to Egrant when she first met her in March last year.

Efimova told Delia that she only confirmed the authenticity of the documents. Caruana Galizia referred to Efimova, in an April 28 blog entry, as the unnamed source of her reports on the Egrant-Muscat affair.

According to Delia, Pilatus Bank claims that Efimova was at the bank as an intern and not an employee between January and March last year.

Efimova, who has an excellent command of Greek and worked until 2014 for the Russian-owned Cypriot company IDF Fragrance Distribution Ltd before leaving Cyprus, said she was informed that she was likely to face arrest upon her return to Cyprus –where she wants to settle with her family.

“My life and that of my family in Malta was in danger and we were forced to leave,” Efimova told the Cyprus Business Mail. “Time showed that we did well to do so. We left in August and they killed Daphne Caruana Galizia in October”.

In May, Caruana Galizia accused prime minister Muscat of trying to present Efimova as a Russian spy acting on instructions from Russian president Vladimir Putin in an attempt to meddle in Malta’s elections. The Russian embassy in Valetta denied Muscat’s allegations.

“I fear I would have the same fate after what they did to her,” Efimova said.

“In November, all newspapers wrote that Malta issued an arrest warrant against me,” the whistle-blower continued. “But since then I have travelled to various European countries and asked police authorities if there is a warrant against me and nobody wanted to carry it out,” she said.

Things took a nasty turn more than two weeks ago. “My father who lives in Russia called me to tell me that two persons came to our house and claimed that they are looking for [Efimova] in Cyprus and issued a European or international arrest warrant,” she explained.

After inquiring in Cyprus, Efimova discovered that Natalia Antoniou, an employee at the Limassol-based Costas Tsirides & Co law firm, filed a complaint with police against her in December in her capacity as director of Fragrance Distribution, for allegedly stealing from the company.

“After four years, did they now happen to have remembered this?” asked Efimova. She was surprised that despite preparing company accounts in previous years there was never a complaint about her stealing.

Antoniou said she filed the complaint “four years ago” on the instructions of the ultimate beneficial owner of Fragrance Distribution, which led to the issuing of a European arrest warrant.

A police source said Efimova had been placed “on the stop list, just recently,” after the issuing of a European arrest warrant.

The police source added that the complaint had been filed four years ago, but it took the police more than three years to complete the investigation and secure the arrest warrants Efimova, a mother of two, and her husband.

“Do they want to arrest my children also?” she asked. “I cannot understand what my husband has to do with that. He has worked neither for Fragrance Distribution nor for Pilatus Bank”.

Efimova said that she was “100 per cent” certain that the complaint was part of a plot organised in Malta to publicly discredit her or have her extradited there.

In a letter dated December 23, Gomes said that she and her colleagues believed “Efimova to be a whistle-blower and we know that she has been harassed and forced to flee Malta, fearing for her life and her family.” She added: “We request, therefore, that she be granted asylum or international protection, since she is at serious risk”.

Takis Hadjigeorgiou, the Cypriot MEP, who participated in the mission to Malta in November, said on Monday that while the request made by the MEPs was not binding it puts “significant pressure” on member states to protect Efimova.

Woman to appear in court after accused of stealing €40,000