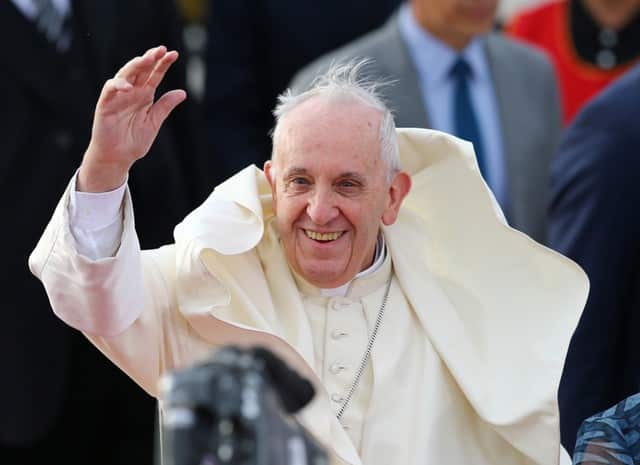 Pope Francis waves upon his arrival in Santiago

Pope Francis expressed his “pain and shame” on Tuesday over a sexual abuse scandal in the Catholic Church in Chile, seeking forgiveness for a crisis that has scarred its credibility and left many faithful sceptical of reform.

“Here I feel bound to express my pain and shame at the irreparable damage caused to children by some ministers of the Church,” he said in the presidential palace, drawing sustained applause from his listeners.

Francis was making his first official address of the trip in the presence of President Michelle Bachelet, other Chilean top officials, cardinals, bishops and foreign diplomats.

“I am one with my brother bishops, for it is right to ask for forgiveness and make every effort to support the victims, even as we commit ourselves to ensuring that such things do not happen again,” he said.

Catholics have been upset with Francis’ 2015 appointment of Bishop Juan Barros to head the small diocese of Osorno in south-central Chile. Barros has been accused of protecting his former mentor, Father Fernando Karadima, whom a Vatican investigation found guilty in 2011 of abusing teenage boys over many years. Karadima has denied the allegations and Barros said he was unaware of any wrongdoing.

But the scandal has gripped Chile, and, along with growing secularization, has hurt the standing of the Church that had been praised for defending human rights during the 1973-1990 dictatorship of Augusto Pinochet.

A poll by Santiago-based think tank Latinobarometro this month showed that the number of Chileans calling themselves Catholics fell to 45 percent last year, from 74 percent in 1995.

A group opposed to the visit posted on Twitter: “No more abuse, no more cover-ups, no more hypocrisy.”

At least eight Catholic churches have been attacked in Chile over the past week, including one with a homemade bomb where unidentified vandals left a pamphlet reading: “Pope Francis, the next bomb will be in your robe.”

No one was injured in the attacks and no one has claimed responsibility.

Hours after the pope arrived, two churches were attacked and burned to the ground almost simultaneously in a small village near Temuco that the pope had planned to visit on Wednesday.

A church in the capital was also attacked during the night, causing minor damage. Vandals burned Chilean and Vatican flags at the site and tossed pamphlets with threats against the pope.

Graffiti on one church in the capital read “Burn pope and “pope accomplice.”

But the welcome most Chileans have given the pope has been warm, with thousands of mostly young people lining the streets of the capital and hundreds of thousands attending a Mass in a Santiago park.

Francis read the speech in the Moneda palace, which Pinochet’s forces bombed from the air and with ground artillery on Sept. 11, 1973 while democratically elected President Salvatore Allende was inside.

The pope referred to that dark period, saying the country had “faced moments of turmoil, at times painful.” He praised the consolidation of democracy but said more had to be done to help the unemployed and native people.

Bachelet told the pope: “How wonderful to be able to tell you that today Chile has changed … we strengthened our democracy, with more tolerance, more freedom and more transparency.”

Chile, with a population of about 17.4 million, is the world’s top copper producer, the fifth-largest economy in Latin America and one of the region’s most stable.

After a private meeting with Bachelet, Francis said Mass for tens of thousands of people in the capital’s sprawling Parque O’Higgins.

Angelina Soto, 67, of San Francisco de Mostazal, south of Santiago, said she and her family arrived before sunrise. “We are very committed Catholics, we’ve been singing all morning,” she said. “I think (the visit) will change Chile, it will make us more generous, and help to close the gap between rich and poor.”

Pogba laying the foundations for Sanchez at United