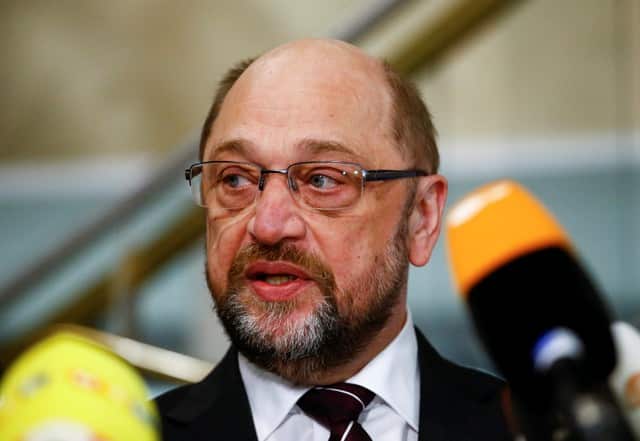 The leader of Germany’s Social Democrats (SPD) tried on Tuesday to quash a grassroots rebellion against a blueprint agreed with Angela Merkel’s conservatives to enter formal talks on a “grand coalition” which could scupper her plan for a fourth term.

After five days of intensive talks, SPD leader Martin Schulz agreed a framework deal with Merkel and Bavarian conservatives on Friday but before he can start official negotiations he needs the backing of his party in a vote at a conference on Sunday.

Convincing them is proving difficult. Two regional branches have already said they do not back his deal.

Many rank and file members accuse Schulz of selling out to Merkel and failing to win a signature policy to take to coalition talks, such as a major healthcare reform or tax hikes for the rich.

Schulz is touring the country to convince his party base.

“We have a duty to look at how to make life better for people,” Schulz said in a live Facebook broadcast on Tuesday.

“We are living in the world of (US President Donald) Trump, (Russian President Vladimir) Putin, (Turkish President Tayyip) Erdogan. We live in a world of dictators who make the world’s breath pause with their crazed ideas … And we have the chance to make Europe a bit more social, peaceful and just,” he added.

If the SPD on Sunday rejects entering talks, the prospect of a new election or a minority government under Merkel loom – both unwelcome options for stability-loving Germans.

Defeat would also almost certainly mean the end of Schulz’s leadership of the SPD, commentators say.

Nearly four months after an election in which the SPD and conservatives slumped to their lowest post-war level, bleeding support to the far right, uncertainty over the shape of the government in Europe’s biggest economy is worrying investors.

Many in the SPD are wary of a re-run of the grand coalition which ruled under Merkel between 2013 and 2017. A junior role leaves them in her shadow, unable to win credit from voters.

The SPD had vowed to go into opposition after its dismal election result but was forced to reconsider in the interest of national stability after Merkel was humiliated by the collapse of three-way talks on a coalition with other parties.

Highlighting the strength of feeling, two regional party branches have already signalled their opposition to the deal – Saxony Anhalt and Berlin.

“A renewed grand coalition cannot be the result of talks. We reject the start of coalition negotiations with the conservatives,” said the motion by Berlin’s SPD chief Michael Mueller which was passed.

It singled out unsatisfactory proposals on home building, rents and migration and integration and expressed great disappointment over the absence of plans for a shakeup of the health system.

The SPD’s youth wing, Jusos, opposes the deal and its head, Kevin Kuehnert, is undertaking his own “NoGroKo Tour”, referring to the faction’s opposition to a grand coalition.

However, it is difficult to predict the outcome of Sunday’s vote as the regional results are not binding. At the Bonn congress 600 delegates are free to vote how they wish.

Both the states that have rejected the agreement so far are relatively small. Schulz is trying to woo delegates in the biggest state, North Rhine-Westphalia, which has more than one quarter of the votes, in a series of events this week.

Trade unions, some other localities and the state of Brandenburg, have already said they back the deal.

Some leading SPD members argue Sunday’s vote is only on the blueprint for a final deal and details can still be negotiated. After any final coalition deal, the SPD’s 443,000 members will be balloted.

Some conservatives have expressed confidence that the SPD will back the blueprint. “I can only recommend moving at top speed,” said Bavarian conservative Alexander Dobrindt.

“I look forward to starting coalition negotiations on Monday,” he said, adding his only concern was the “masochistic way” the SPD had of talking down its successes.

Swiss campaign to curb immigration from EU gets go-ahead