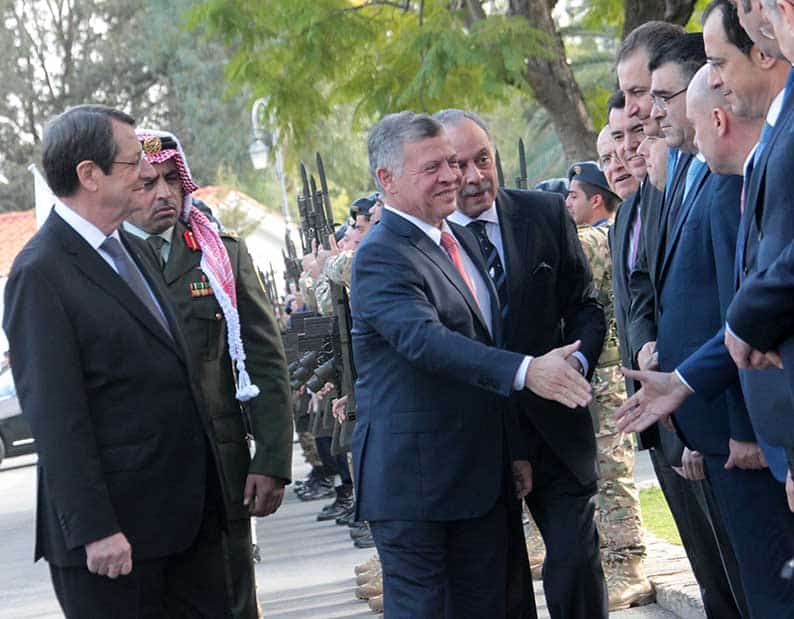 Cyprus, Greece and Jordan on Tuesday signed agreements to cooperate in areas such as renewable energy, the maritime sector and the fight against the illicit antiquities trade, during the first-ever trilateral summit held between the leaders of the three countries.

Cyprus and Jordan also signed bilateral agreements on economic and technical cooperation, mutual academic recognition of higher education qualifications, public health and the medical science, as well as agriculture and rural development on the sidelines of the summit.

Following expanded talks between the leaders of the three countries and their respective delegations, President Nicos Anastasiades, Greek Prime Minister Alexis Tsipras and King Abdullah II of Jordan signed a mix of ‘arrangements’, ‘undertakings’, an agreement and a memorandum of understanding covering the three areas of mutual interest.

They also issued a joint declaration with guiding principles for the partnership.

Anastasiades said the trilateral summit had reconfirmed the relations and bonds of friendship between the three countries and set the foundations for strategic and regional partnership for political, economic and social benefits.

He described the declaration for cooperation between the three countries in the fields of security, peace and prosperity as important, adding that the talks were constructive and would help in further promoting relations.

“The declaration reflects the common understanding of the three countries that cooperation can contribute to handling the challenges in the wider region and peace, security and stability as well as prosperity,” he said.

He said the summit had taken place at a critical time for the wider region.

“One of the most important challenges we are asked to handle is fighting terrorism, a phenomenon that requires the close cooperation of the three countries,” he added.

He also assured King Abdullah of Cyprus and Greece’s support in the EU.

The Jordanian leader, for whom roads were closed in the capital to ensure his security, said the summit marked “the launch of what we hope will develop into a fruitful trilateral partnership with benefits for our peoples and our wider region”.

“We in Jordan are committed to cooperate in such vital fields as energy, water, agriculture, tourism and moreover the agreements we are signing today will undoubtedly help us advance our ties even further,” he said.

“Creating partnerships between the private sectors of our three countries in these policy fields will provide jobs and opportunities for our peoples and benefit our region by ensuring peace and prosperity and synergies”.

The King also said Jordan looked forward to working with Cyprus and Greece to benefit from the EU… “to enhance our national industries and increase our exports to Europe”.

Tsipras said an excellent initiative had been launched to handle the challenges but also the opportunities in Eastern Mediterranean.

He said that the trilateral partnership should have a strategic prospect and for this, it must be based on strong foundations.

He also said that Jordan, which hosts 1.5 million refugees, needs to be further assisted by the EU while Cyprus and Greece were on the frontline of the EU when dealing with refugees.

Referring to the Cyprus problem, Tsipras said that after the presidential elections he expected a window of dialogue to open for the Cyprus talks to resume.

Arms dealer on US blacklist has Cyprus links