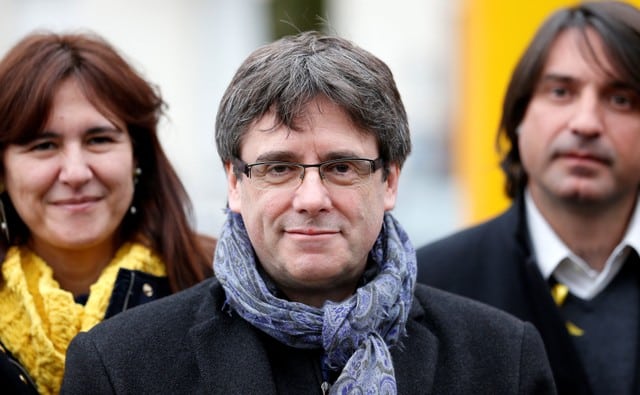 Catalonia’s parliament met on Wednesday in a first step towards forming a new government dominated by the question of whether sacked former leader Carles Puigdemont can return as president and continue his push for independence from Spain.

Puigdemont’s supporters have suggested the former journalist could rule the wealthy region via video link from self-imposed exile in Brussels, to where he fled in October to avoid arrest for charges including sedition and treason.

The Spanish government had imposed direct rule on the region, whose economy is bigger than that of Portugal, after the previous Catalan administration led by Puigdemont made a unilateral declaration of independence.

However, a regional election in December returned a slim majority to secessionist parties in terms of seats.

In a sign of strength for the parties seeking a split from Spain, Catalan lawmakers on Wednesday elected pro-independence politician Roger Torrent as speaker of the regional parliament.

Torrent was the preferred candidate for speaker of the two main pro-independence parties, Junts per Catalunya (Together for Catalonia) and Esquerra Republicana de Catalunya (Republican Left of Catalonia).

Puigdemont tweeted his congratuations to the new speaker.

“I am sure you will exercise the post with nobility and bravery, protecting institutions and the country,” he said.

The secession movement has also been weakened by the fact that five members of parliament, including Puigdemont, are in Brussels while three are in custody for their role in an illegal independence referendum in October.

Late on Tuesday, the two main pro-independence parties said they would back Puigdemont as presidential candidate. A first vote to choose a new leader is likely to take place on Jan 31.

Spanish Prime Minister Mariano Rajoy has dismissed the possibility that Puigdemont could rule by Skype as absurd and the Catalan parliament’s own legal experts have ruled that any president must be physically present in parliament.

The decision lies in the hands of the Catalan parliamentary committee which was voted in on Wednesday with a clear majority for the secessionists with four of seven members coming from the pro-independence parties.

Rajoy has said he will contest in the courts any move to allow Puigdemont to return to power.

The seats of absent lawmakers were marked with giant yellow ribbons on Wednesday. Even if these lawmakers are unable to vote, the pro-independence parties will still have more weight in parliament than those favouring unity with Spain.

“I know that we are going to have a lot of problems with the Spanish government but we are going to do it,” said demonstrator Dolors Esplugas. “On Jan 31, Carles Puigdemont is going to be appointed.”

Uncertainty over the region’s future has led to thousands of companies, including two of the country’s top banks, moving their headquarters from Catalonia to elsewhere in Spain.

The independence drive has also increased tension between Madrid and Barcelona, divided people the region, and caused resentment in much of the rest of Spain.

Dylan Farrow to speak out about Woody Allen in TV interview