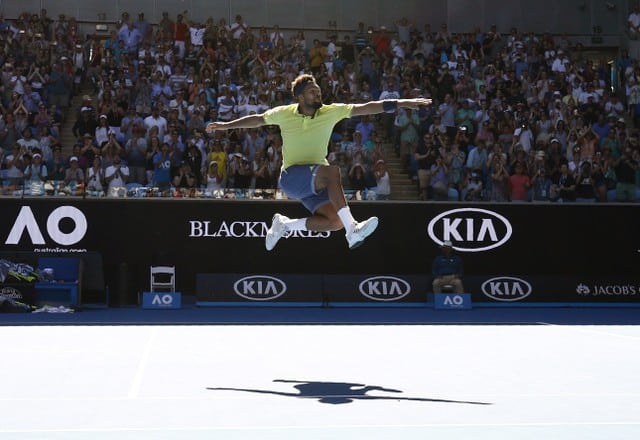 1220 KYRGIOS POWERS PAST TROICKI
Home favourite Nick Kyrgios, seeded 17th, fired 17 aces to see off Serbian Viktor Troicki 7-5 6-4 7-6(2) in the second round. He will next face 15th seed Jo-Wilfried Tsonga.

“I’m very proud of the way I came back. I just tried to mentally stay focused. It was very hard, and she was playing well,” Wozniacki said after the match.

0740 TSONGA BATTLES PAST SHAPOVALOV IN MARATHON
Former Australian Open finalist Jo-Wilfried Tsonga came back from 5-2 down in the final set to beat Canadian teenager Denis Shapovalov 3-6 6-3 1-6 7-6(4) 7-5 after three hours and 37 minutes of play.

0545 SVITOLINA SURVIVES SINIAKOVA SCARE
Fourth seed Elina Svitolina came from a set down to beat Czech Katerina Siniakova 4-6 6-2 6-1 and book a spot in the third round.

Ukrainian Svitolina will next face 15-year-old compatriot Marta Kostyuk, who beat Australian wildcard Olivia Rogowska 6-3 7-5. She is the youngest player to reach a grand slam third round since Mirjana Lucic-Baroni at the 1997 U.S. Open.

“I remember being at that age. No pressure. Second round, creating history and all that,” the 26-year-old Rogowska said. “She (Kostyuk) came out firing so credit to her. She’s going to be a really good player.”

0510 BENCIC BOWS OUT
Two days after beating Venus Williams in the first round, Swiss Belinda Bencic started flat and never recovered in a 6-1 6-3 defeat by Thai qualifier Luksika Kumkhum.

0350 CARRENO BUSTA INTO ROUND THREE
Pablo Carreno Busta, a U.S. Open semi-finalist last year, is the first player from the men’s field through to the third round after the 10th seed’s opponent, Gilles Simon, retires hurt while trailing 6-2 3-0.

0328 PAVLYUCHENKOVA UPSET BY BONDARENKO
Anastasia Pavlyuchenkova, the Russian 15th seed, has been knocked out by Ukraine’s Kateryna Bondarenko in a 6-2 6-3 second round upset on Hisense Arena.

“I am really happy, I don’t really like playing first match but I guess it worked okay today,” said the world number 94.

Play got underway on schedule at 11 am local time (0200 Cyprus time) at Melbourne Park, where the temperature was 24 degrees Celsius and forecast to peak at 29

Plant of the week: The single most important source of oxygen

Wilma! Malaysian sultan gets his own Flintstone car