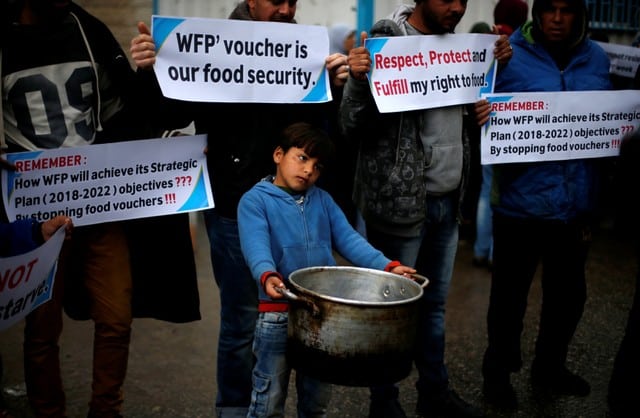 Palestinian boy carries a cooking pot during a protest against aid cut, outside United Nations' offices in Gaza City

A cut in US funding for a UN agency that helps Palestinian refugees will affect regional security and could put vital health, educational and food services at risk, its chief said on Wednesday, adding he would appeal for world donations.

Washington said on Tuesday it would provide $60 million to the UN Relief and Welfare Agency while keeping back a further $65 million for now. The US State Department said UNRWA needed to make unspecified reforms.

Palestinians, already angered by US President Donald Trump’s Dec 6 recognition of Jerusalem as Israel’s capital, denounced the decision, which could deepen hardship in the Gaza Strip.

At one of UNRWA’s food distribution centres in Gaza, Palestinians loaded sacks of flour, sugar and rice, canned food and oil into cars and onto donkey carts and spoke of harder times ahead.

“I live on food aid,” said Bassam Inshasi, a father of seven. “The situation is already difficult and it will become more difficult.”

More than half of the two million people in the the Gaza Strip, where the unemployment rate is 46 per cent, are dependent on support from UNRWA and other humanitarian agencies.

UNRWA Commissioner-General Pierre Krähenbühl said he would appeal to other donor nations for money and launch “a global fundraising campaign” aimed at keeping the agency’s schools and clinics for refugees open through 2018 and beyond.

“At stake is the dignity and human security of millions of Palestine refugees, in need of emergency food assistance and other support in Jordan, Lebanon, Syria, and the West Bank and Gaza Strip,” he said in a statement.

Krähenbühl said 525,000 boys and girls in 700 UNRWA schools could be affected by the fund cut, as well as Palestinian access to primary health care, but he pledged to keep facilities open through 2018 and beyond.

“The reduced contribution also impacts regional security at a time when the Middle East faces multiple risks and threats, notably that of further radicalisation,” he said.

UNRWA was established by the UN General Assembly in 1949 after hundreds of thousands of Palestinians fled or were expelled from their homes in the 1948 war that followed Israel’s creation. It says it currently aids five million registered Palestinian refugees in the Middle East.

In a Twitter post on Jan 2, Trump said that Washington gives the Palestinians “HUNDRED OF MILLIONS OF DOLLARS a year and get no appreciation or respect.” Trump added that “with the Palestinians no longer willing to talk peace, why should we make any of these massive future payments to them?”

While US officials did not link the decision to Trump’s tweet, they made a point often advanced by him, saying the United States had been UNRWA’s single largest donor for decades.

Trump’s aides initially debated whether to cut off all UNRWA aid, an unidentified US official said, but those opposed argued that could further destabilise the region.

“Any reduction of US aid to UNRWA will not succeed in imposing the American positions, which are biased in favour of the occupation,” the Palestinian Foreign Ministry, referring to Israel, said in a statement.

Israeli Prime Minister Benjamin Netanyahu, who has called for a gradual cut in UNRWA funding and transferring its responsibilities to the UN global refugee agency, voiced measured support for the U.S. step.

But he appeared to acknowledge it could leave Israel – which maintains tight restrictions on the movement of people and goods across its border with Hamas Islamist-controlled Gaza – with a potential humanitarian crisis on its doorstep.

Asked on Wednesday by Israeli reporters accompanying him on a diplomatic trip to India whether he supports the US funding cut, Netanyahu said: “Of course, but I still suggest, because I think there are certain needs, to do what I have said … every step taken also contains some risk.”

Some to recoup losses from provident funds hit in 2013

Second seed Wozniacki battles back from the brink