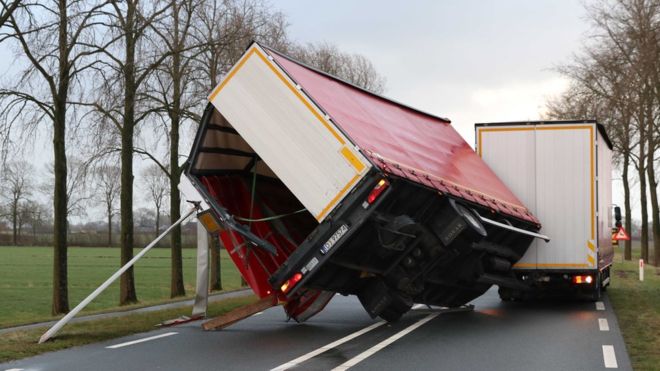 Three people were killed in the Netherlands and three people died in Germany on Thursday as powerful winds toppled trees, blew trucks off the road and forced the cancellation of hundreds of flights.

Amsterdam’s Schiphol Airport briefly suspended all air traffic on Thursday as gusts of up to 140 kph were recorded along the coast.

At least 260 flights were scrapped and falling roof tiles led to the closure of airport terminals. Nationwide train services and many tram and bus services were halted after the highest weather alert was issued.

In Rotterdam, shipping containers were toppled and entire roofs ripped off homes.

Schiphol later said some flights would resume as the storm moved inland, but that there would be severe delays.

In Germany, a 59-year-old man was killed by a falling tree in Emmerich near the Dutch border, a town spokesman said and a 68-year-old lorry driver was killed in a storm-related accident in Lippstadt, western Germany, police said.

In Bad Salzungen, Germany, a 28-year-old fireman was killed when a tree fell on him while trying to help a woman who had been trapped in her car by fallen trees, the district administration said.

Some 100,000 people in NRW and in the northern state of Lower Saxony were left without power, a spokesman for the energy company Westnetz said.

He said the company hoped to restore power within hours, provided the storm did not cause further damage.

The German railway operator Deutsche Bahn said it had suspended nearly all long-distance rail service due to the storm and significant disruptions were expected again on Friday.

Regional trains were also halted across northern and eastern Germany and some other areas, it said in a statement.

In a statement, the rail operator said only a limited number of trains were operating on international routes. It said it had dispatched emergency crews to deal with storm damages.

Some bridges and some stretches of road were closed in NRW. In Munich, eight domestic flights by Lufthansa were cancelled, the airport operator said.