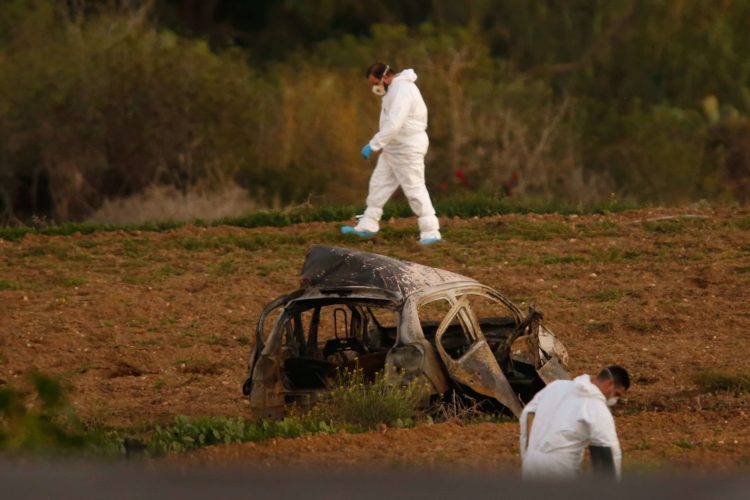 Forensic experts walk in a field after a powerful bomb blew up a car (Foreground) and killed investigative journalist Daphne Caruana Galizia in Bidnija, Malta, October 16

Maria Efimova, the former Pilatus Bank employee and source of the slain Maltese journalist Daphne Caruana Galizia, said that she has applied for political asylum in an unspecified European Union country.

“I have myself made an application for political asylum in the country where I am, and I just asked from the PANA Committee members to provide me with a letter, a letter of opinion so on their view I can be considered as a whistle-blower,” she told Manuel Delia, a Maltese journalist and blogger in an interview on Wednesday.

The interview with Efimova’s comments appeared on Wednesday on Delia’s blog, a day after it emerged that Cypriot authorities had issued an arrest warrant against her and her husband after a complaint filed against her by I.D.F. Fragrance Distribution LTd, one of her former employers.

The members of the European Parliament’s committee, which looks into money laundering “confirmed” that she was a whistle-blower, Efimova added. “I filed this letter together with an application,” she said.

On Thursday, a police source in Cyprus said Cypriot authorities recently secured a court order to issue a “European and International” arrest warrant against Efimova, a mother of two, in connection with an alleged embezzlement case at a Limassol-based firm, where she worked until 2014. Precondition for the issue of a such a warrant is that the person in question faces a possible prison term of more than a year, the source said.

In a previous interview, Efimova denied any wrongdoing and said that the complaint filed by a director of Fragrance Distribution Ltd was an attempt to discredit her.

Member of the European Parliament (MEP) Maria Gomes, who led a delegation visiting Malta six weeks ago, asked the national authorities of European Union member states in a letter dated December 13, to either grant asylum or international protection to Efimova since “she is at serious risk”.

Gomes, a Portuguese MEP and member of the Socialist group, said on Wednesday in an email that she was unaware of Efimova’s whereabouts and whether she was “sufficiently protected,” hence she wrote the letter.

Efimova said in a recent interview to the Cyprus Business Mail that she had to abandon Malta in August fearing she would have a similar fate as Caruana Galizia, who was killed in a car bomb attack on October 16.