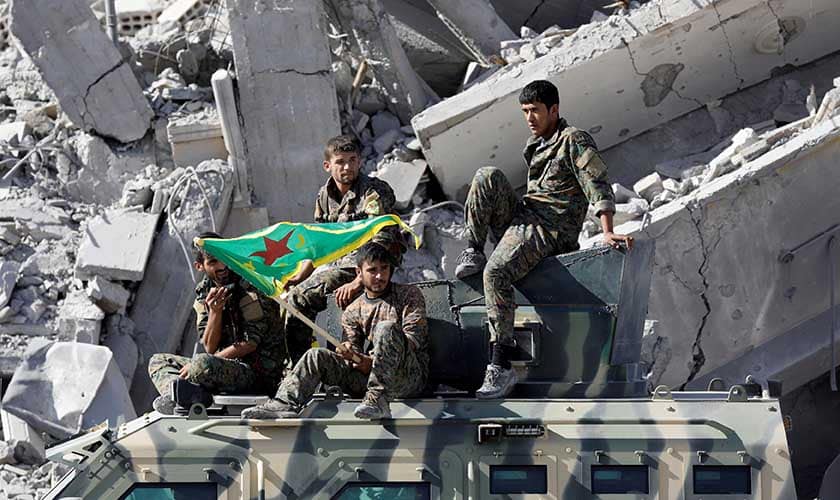 Fighters of Syrian Democratic Forces ride atop an armoured vehicle after Raqqa was liberated from the Islamic State militants, in Raqqa last October

Turkey’s President Recep Tayyip Erdogan is an angry man at the best of times, but on Monday he outdid himself: “This is what we have to say to all our allies: don’t get in between us and terrorist organisations, or we will not be responsible for the unwanted consequences.” That was a barely veiled threat that he will use force against American troops if they try to stop him from attacking the Syrian Kurds.

The iron law of international politics in the Middle East is that everybody betrays the Kurds. It was on display again in Iraq last October when the Baghdad government seized almost half the territory ruled by the Kurdistan Regional Government.

In obedience to that unwritten law, nobody else objected – including the United States, even though it had armed the Iraqi Kurds to fight Isis. But now the US government has effectively told the Syrian Kurds that they can keep the huge chunk of Syria they control for the indefinite future. And the Turkish government, predictably, has gone ballistic.

In President Erdogan’s book, any Kurd with a gun in his hand is a ‘terrorist’, and the Syrian Kurds are a ‘terror army’. In fact, they played the main role, under US air cover, in destroying the Syrian base of the real terrorists: Islamic State. As a result the army that the Kurds dominate, the Syrian Democratic Forces (SDF), now controls almost half of Syria’s territory.

It’s the north-eastern, relatively empty half, with less than one-fifth of Syria’s population, but it includes all of Syria’s border with Iraq and almost all its border with Turkey. On Sunday Washington confirmed that it will help the SDF create a new 30,000 ‘border security force’ over the next several years that will police those borders – and also the ‘internal’ border between Kurdish-controlled Syria and the rest of the country.

The ‘rest of the country’ is now mostly back under the control of Bashar al-Assad’s regime, after six years of civil war, thanks largely to the intervention of the Russian air force and Iranian militas. Both Moscow and Tehran immediately accused the United States of planning to partition Syria, and there is some substance in the accusation.

Washington is indeed creating a Kurdish-ruled protectorate in the northeastern half of Syria, and has declared that 2,000 US troops will stay there indefinitely. Or, to be more precise, until progress has been made in the UN-led peace talks in Geneva and it is certain that Islamic State is permanently defeated. Which is another way of saying indefinitely.

The main purpose of this sudden escalation in the US commitment in Syria is presumably to stop the Russians from winning a total victory in the country. The Syrian regime, of course, has denounced the plan as a “blatant attack” on its sovereignty – but Turkey is the only country threatening to kill Americans over it.

The Kurds always get betrayed because what they really want is an independent Kurdistan including all 20 million Kurds. But to create that, the four most powerful countries in the region – Turkey, Iran, Syria and Iraq – would all have to be partially dismantled. They will do whatever it takes to prevent that.

Erdogan re-started the war with Turkey’s own Kurdish separatists two years ago mainly for electoral advantage, but he really is fanatical on the subject. He is convinced that the Syrian Kurdish organisation, the YFP, is really just a branch of Turkey’s own PKK (which does have a terrorist past), and he is determined to destroy it.

The declaration of a de facto American protectorate over the Kurdish-dominated parts of Syria only makes the matter more urgent in Erdogan’s eyes. “A country we call an ally [the US] is insisting on forming a terror army on our border,” Erdogan said in a speech in Ankara on Monday. “What can that terror army target but Turkey? Our mission is to strangle it before it’s even born.”

That’s nonsense: the Syrian Kurds are not terrorists. They are American allies – and when the Turkish army first attacked Kurdish-controlled areas of northern Syria last spring, US troops drove in front of the Kurdish lines flying very large American flags to protect their allies from Turkish fire.

What Erdogan meant in that quote at the start was that next time, if American soldiers and flags obstruct Turkish operations, they will be blown away. Does he mean it? He may not know himself, but his army is going to move into several parts of Syrian Kurdish territory this week or next. Turkish artillery is already softening the targets up.

But the likelihood of a shooting war between Turks and Americans remains very low. Like Obama before him, Trump is pursuing a policy in Syria that is not backed up by enough force to make it credible. Everybody assumes that he is bluffing, and that he will betray the Syrian Kurds in the end.

Our View: Solar power has been neglected for far too long