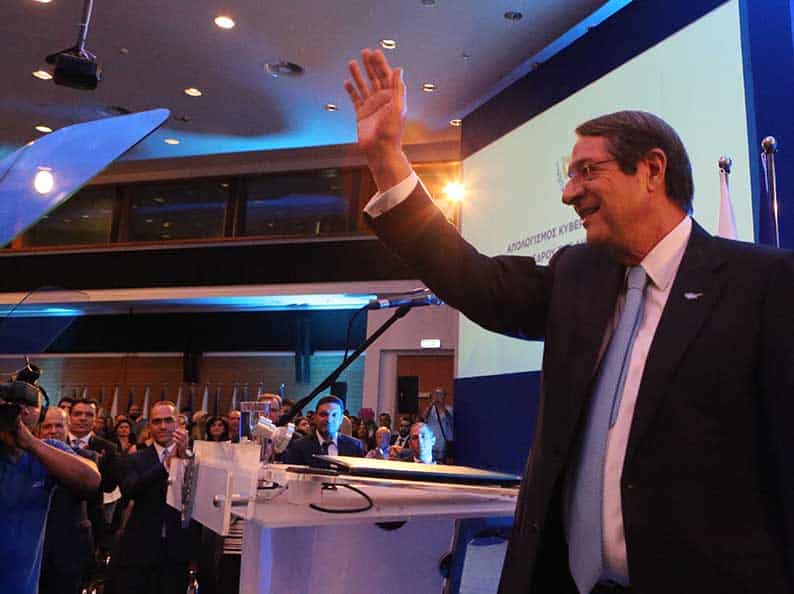 PRESIDENT Nicos Anastasiades is projected to win a second term in office, according to a survey released on Thursday.

The final poll commissioned by the CyBC again showed the incumbent comfortably in the lead.

Among 1010 respondents, 27 per cent stated they would cast their ballot for Anastasiades in the first round, followed by 16 per cent for Akel-backed independent Stavros Malas.

Nicholas Papadopoulos trailed in third place with 14 per cent, followed by Elam’s Christos Christou with 4.5 per cent, and lastly Giorgos Lillikas at 2 per cent.

Yet 18 per cent of respondents were undecided, while 11 per cent said they would abstain.

Asked whom they were more likely to vote for in a runoff between Anastasiades and Malas, 42 per cent picked the incumbent and only 24 per cent Malas.

In the Anastasiades v Papadopoulos scenario, 39 per cent would cast their ballot for the president, and 25 per cent for the Diko leader.

In terms of perception, too, Anastasiades was seen as the winner in these elections. Asked who they thought would win, irrespective of their own preferences, 68 per cent said Anastasiades, 7 per cent Papadopoulos, and 5 per cent Malas.

On which candidate was expected to keep his promises (more than one response possible), 18 per cent said Anastasiades, 17 per cent Malas, and 13 per cent Papadopoulos; 44 per cent said none of the above.

The president also appeared to be the most popular candidate overall, with 54 per cent of respondents having a generally favourable opinion of Anastasiades. Malas came in second with 43 per cent, then Papadopoulos with 39 per cent, Lillikas with 24 per cent, and Christou with 21 per cent.

Despite this, Anastasiades did not fare well at all when respondents were asked to rate the best president in the post-Makarios era.

Here, 32 per cent believed that Glafcos Clerides was the best president. There followed Tassos Papadopoulos with 26 per cent, Giorgos Vasiliou at 15 per cent, and Spyros Kyprianou at 5 per cent.

Just 3 per cent thought Anastasiades the best president, only slightly better than Christofias at 2 per cent.

In the issue-themed part of the questionnaire, 51 per cent of respondents thought the country’s economic situation is better compared to a year ago; 36 per cent said it was the same, and 12 per cent that it was worse.

On the Cyprus issue, 53 per cent were in favour of a compromise settlement, 33 per cent preferred the status quo, and 12 per cent picked neither.

Macron spells out reasons for Britain to stay in EU

Our View: Povek must understand that consumer habits have changed