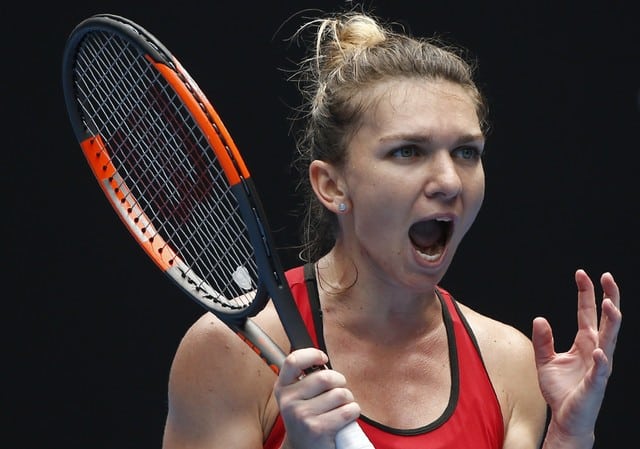 In a match dominated by serve the 25-year-old fired down 11 aces and offered up only one break point opportunity as she reached the last 16 for the second successive year.

Safarova was equally efficient on her own delivery but finally cracked in the 11th game of the second set to leave her opponent with the opportunity to serve for the match.

She needed no second invitation, crunching three aces including one on match point.

“It’s tough to play another Czech player especially as we are Fed Cup team mates,” Pliskova said on Margaret Court Arena. “It’s always close but I served well and that’s the key for me.”

Another Czech could be waiting in the fourth round if Barbora Strycova gets the better of lucky loser Bernarda Pera later on Saturday.

SIMONA HALEP vs LAUREN DAVIS 2-1 (4-6,6-4,15-13)
World number one Simona Halep saved three match points before edging an inspired Lauren Davis 4-6 6-4 15-13 in a thrilling marathon to reach the fourth round of the Australian Open on Saturday.

The Romanian fought back from the brink at 11-10 in the epic final set before serving out for the match on the fourth attempt at Rod Laver Arena.

Halep closed out the dramatic contest on the first match point, when Davis, who had gone for broke all match, fired into the tramlines.

Halep will meet the winner of Ashleigh Barty and Naomi Osaka for a place in the quarter-finals.

Madison Keys vs Ana Bogdan 2-0 (6-3,6-4)
After the commotion that accompanied her run to a first grand slam final in New York last year, American Madison Keys has been more than happy to fly beneath the radar in Melbourne.

That was the case again on Saturday as the 20th seed beat 104th-ranked Romanian Ana Bogdan 6-3 6-4 to progress smoothly through to the fourth round without dropping a set.

“I am always happy if I’m not the drama, and I feel like the U.S. Open I was the drama every night match that I played,” the 22-year-old, who was beaten at Flushing Meadows by compatriot Sloane Stephens, told reporters.

“It’s a good position for me to be in and I’m enjoying it.”

The stakes will be raised now she has reached the business end of the tournament, with a first-ever meeting against French eighth seed Caroline Garcia looming on the horizon.

However, after three straightforward wins, Keys is fresh and reaping the rewards of a decision to end her 2017 campaign in September to avoid aggravating a left wrist that required surgery at the end of the previous season.

“I finished the U.S. Open and I was exhausted,” she said. “As amazing as that run was, the combination of being exhausted from that and having a wrist that still wasn’t 100 percent, I just needed to kind of shut it down, calm down.

“Then I was really excited to start the new season.”

With seeds scattered to the wind in the first week, 2015 semi-finalist Keys has looked serene so far and once she broke Bogdan in the eighth game, she always looked the likely winner.

After breaking early in the second, she was in total command and her only moment of anxiety came when serving for the match at 5-4 as some errors offered up three breaks points.

Keys fended off the danger, though, and completed victory with a punishing forehand that landed right on to the baseline after 73 minutes.

Garcia was one of the most improved players on the women’s circuit in 2017 and the Frenchwoman recovered after a mid-match slump to beat Belarusian Aliaksandra Sasnovich 6-3 5-7 6-2.

The Celtic charm of storytelling