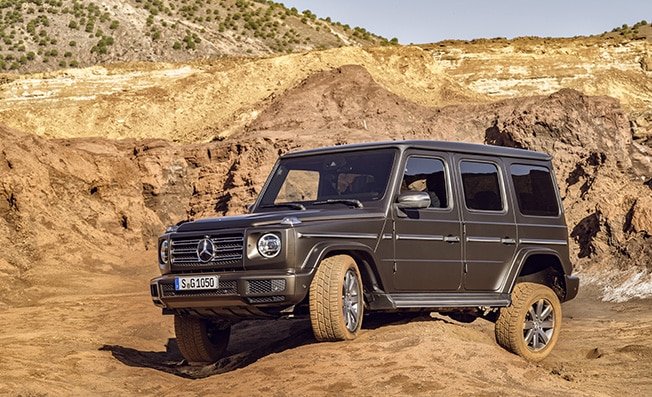 Mercedes says the new G-Class performs even better off-road, while on-road it is “significantly more agile, dynamic and comfortable” than its predecessor

Mercedes’ luxury off-road vehicle, the G-Class, hasn’t changed its appearance much since 1979, and the latest model retains some of its signature features: the distinctive door handle, the robust exterior protective strip, the exposed spare wheel on the rear door and the prominent indicator lights.

“The new G-Class is setting the bar higher still in all relevant areas – in terms of performance both on and off the road as well as with regard to comfort and telematics. Our ‘longest-serving’ model series is therefore ideally equipped to continue its success story. In short, the new ‘G’ is still a ‘G’, only better,” says Ola Kallenius, Member of the Board of Daimler AG responsible for Group Research and Mercedes-Benz Cars Development.

Developing the new G-Class was challenging for the team. “Enhancing an icon such as the G‑Class in technological terms was both a challenge and an opportunity at the same time. Each part and every bolt came under close scrutiny,” says Dr Gunnar Guthenke, Head of the Off-Road Product Group at Mercedes-Benz. “With the body, our main focus was on increasing the vehicle rigidity and the connections between the suspension and drivetrain with the ladder-type frame.”

At market launch in June, the G-Class will be available at an entry-level price of €107,040.50 (price in Germany, incl. VAT) and thus remains at the level of the preceding version.

The specification includes a host of new features such as LED headlamps, driving assistance systems, a ‘high-quality’ interior with leather seats, and new suspension.

The new design remains true to the character of the original; although the car has been continually enhanced technically over the decades but visually has hardly changed. The new G-Class is 53 mm longer and 121 mm wider to give ‘greater presence’ on the road, as well as off-road.

The exterior maintains the classic look but the interior has undergone a modern redesign which “reinterprets the genes of the classic vehicle to reflect the exterior”.

The clearly arranged and redesigned instrument panel features tube-look analogue round dials as standard, and as in the new E-Class and S-Class, an instrument cluster in the form of a large display showing virtual instruments in the driver’s direct field of vision and a central display above the centre console is available as an option. In this case the two 12.3-inch displays blend visually into a Widescreen Cockpit beneath a shared glass cover.

Thanks to haptic impulses and audible feedback, drivers can use the touchpad with controller in the centre console without taking their eyes off the road.

The revised dimensions of the car benefit not only the driver and front passenger, but also the passengers in the back; the rear seats can be folded down to 60, 40 or 100 per cent. Other features include a memory function for the driver’s seat and seat heating front and rear.
Mercedes says the new G-Class performs even better off-road, while on-road it is “significantly more agile, dynamic and comfortable” than its predecessor.

The new suspension is an independent suspension with double-wishbone front axle in combination with a rigid rear axle which is controlled by four trailing arms on each side and a Panhard rod. This makes normal driving on the road more comfortable while, in rough terrain, the rear spring bounce of 82 mm and rebound of 142 mm (plus ground clearance of 241 mm to the rear axle gear) help to ensure a safe ride even in ‘extreme’ situations.

DYNAMIC SELECT is available with up to five driving modes. This system modifies the characteristics of the engine, transmission, suspension, steering and assistance systems at the driver’s behest. The four programs ‘Comfort’, ‘Sport’, ‘Eco’ and ‘Individual’ can be set via the DYNAMIC SELECT rocker switch.

There’s a 9G‑TRONIC automatic transmission with torque converter, with a reduction in the shift and response times of the 9-speed transmission by means of a dedicated software application.

Electromechanical rack-and-pinion steering is standard, which allows for assistance systems such as Parking Assist.

The G-Class is the passenger car with the longest production run in the history of Mercedes-Benz and also the forefather of all the marque’s SUVs.

The story began in 1972 with a collaboration agreement between then Daimler-Benz AG and Steyr-Daimler-Puch in the Austrian city of Graz. The first concept to be developed was a vehicle with “superior off-road capability”, which at the same time aimed to appeal to customers as a safe vehicle suitable for recreational purposes. All-wheel drive and 100-per cent differential locks have been part of the ‘G’ since that time, as has the ladder-type frame.

At the time of its market launch, in the spring of 1979, it was available with a choice of four engine variants from 53 kW/72 hp to 115 kW/156 hp. Customers had the option of a cabriolet with a short wheelbase or station wagon models with short or long wheelbase.

In 1989 the model series 463 marked the beginning of an evolutionary process that was not just about keeping pace with technical progress. It also emphasised the car’s character and, since 1993, a vehicle with the official name: G-Class.