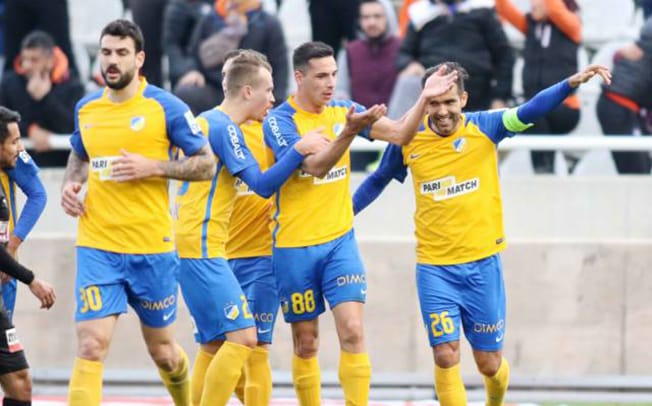 Leaders Apoel were the winners in the big weekend game, beating AEK 3-1 while second-placed Apollon maintained the pressure with a relatively easy but narrow win over Aris.

Omonia defeated AEL in Limassol in the other big game while Nea Salamina and Alki eased their relegation fears with wins over Pafos FC and Doxa Katokopias.

Apoel continued their impressive run with their eighth consecutive win, this time against one of their main championship rivals AEK, a team they had not defeated in their previous six encounters.

Despite dominating possession in the early stages, Apoel were unable to pose any real threat while AEK were dangerous whenever they broke into attack.

It was no surprise when the visitors took the lead in the 21st minute through the league’s top scorer Florian Taulemmeuse who beat Apoel goalkeeper Perez from close range.

The goal sparked the home side into action but they were unable to break down AEK’s well-organised backline with defender and captain Catala in imperious form.

However a controversial penalty, after AEK’s Tete was adjudged to have tripped Nsue inside the penalty area, allowed Apoel to draw level, their captain Nuno Morais sending Pablo the wrong way.

A few minutes before the break AEK could have regained the lead but Acoran saw his effort rebound off the post and safely into the hands of Perez.

The second half was a scrappy affair riddled with niggling fouls, tough challenges and few chances.
AEK’s Tomas could have given his team the lead shortly after the break while at the other end the only notable attempt was a shot from Apoel’s Zahid that was turned round the post by the AEK keeper.

Fifteen minutes from the end, Giorgos Efraim, who had come on as a substitute a few minutes earlier, scored what should probably be the goal of the season and will be replayed over and over again. He picked up the ball on the halfway line and seeing AEK’s keeper off his line, managed to beat him from almost 50 metres with an exquisite strike.

AEK pushed forward in search of the equaliser but Ivan Triscovski shot high and wide when he should have done better. This left spaces at the back for Apoel to exploit and they did in added time when Nsue tapped the ball into an empty net after some fine work by Zahid and Efraim.

Unbeaten Apollon should have made sure of the points against Aris by half-time but had only Zelaya’s goal to show for their efforts. They continued to press forward and create chances in the second half but were unable to make the game safe with a second goal.

In the final stages, Aris’ Frangou almost made them pay for their profligacy in front of goal but Apollon keeper Bruno Vale managed to beat away his goalbound effort.

Omonia moved to within a point of AEL after they defeated them by the odd goal in a five-goal thriller.
The lead changed three times with Omonia finally securing the three points thanks to a horrendous error by AEL’s goalkeeper Vozinhia who gifted Omonia’s Mamadu his second and his team’s third goal in the 86th minute.

Matt Derbyshire had given Omonia the lead with a clinical finish in the 16th minute but two goals in quick succession first by Andreas Avraam in the 36th minute and then by Arruabarrna four minutes later had given AEL a deserved first-half lead.

Against the run of play Mamadu got his first goal of the game on the hour mark and equalised for Omonia before the moment of madness by Vozinhia that allowed Ivaylo Petev’s outfit to record their fifth win in six since the Bulagrian took over.

Despite dominating possession from the start Anorthosis had to wait until the 49th minute to open the score against bottom-placed Ethnikos Echnas.

It was a scruffy goal with centre-back Douglao prodding the ball past Ethnikos’s goalkeeper Bogadinov from close range.

Shehu, who was probably playing his last game for the Famagusta team before his imminent transfer to the Turkish league, doubled the score from the penalty spot.

Andreas Elia reduced the arrears giving Ethnikos some hope but Camara made the points safe for Anorthosis with a strike shortly before the end of the game.

Alki moved further away from the danger zone after they defeated Doxa Katokopias thanks to an excellently executed free-kick by Ruca just before the half-hour mark.

Carlao opened the score in the first half with Korreia and Tiago netting in the second half.

Ermis thrashed Olympiakos 4-0 in the final game of the round on Monday evening.