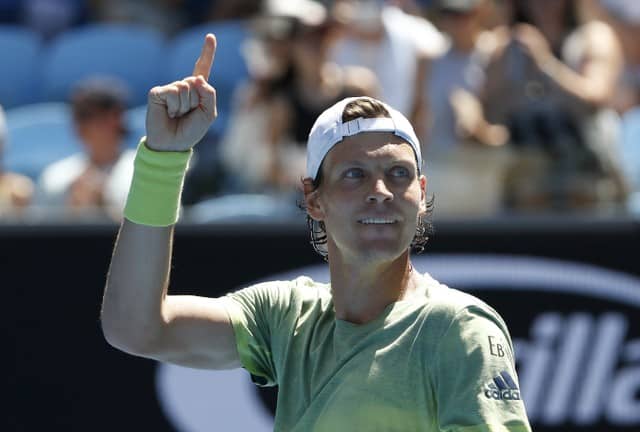 THOMAS BERDYCH vs FABIO FOGNINI 3-0 (6-1,6-4,6-4)
Tomas Berdych belied his lowest seeding at a grand slam since 2010 by sweeping into his seventh Australian Open quarter-final with a convincing 6-1 6-4 6-4 victory over Fabio Fognini on Monday.

The 32-year-old 19th seed converted six-of-11 break points and matched the entertaining Italian’s 37 winners with a much lower error count, securing the victory with a rasping forehand that Fognini himself would have been proud of.

“I’m glad to be back in the shape that I am right now, which is finally healthy and that makes the difference,” said former world number four Berdych, whose lowly ranking resulted from an injury-plagued 2017.

“I can play freely and I can have joy from the tennis. I can enjoy the time being on court. Yeah, the results are coming with that,” he added.

“I was expecting a tough one, and I was ready for it. I had a good game plan, and I was able to execute it all the way through the three sets, so I did it way better today.”

Berdych next meets Roger Federer, who beat him in the third round last year on his way to the title, or Hungarian baseliner Marton Fucsovics for a place in his third Melbourne Park semi-final.

The players had split their previous four matches but the opening set was all Berdych with the Czech pounding down five aces and 13 winners to wrap it up in just over half an hour.

Fognini was hobbling around at the end of the set and needed some medical treatment on his foot, but suddenly sprang to life at a break down in the second.

Pouncing on Berdych’s second serve, he prowled along the baseline and broke back for 2-2 when the Czech netted after a 24-shot rally, before holding with a brilliant running winner.

Berdych, though, started hitting the mark more frequently with his first serve and broke again before doubling his lead when Fognini went long after 47 minutes.

The 30-year-old Italian had by now started a running dispute with umpire James Keothavong over challenges and a couple of foot fault calls, and quickly went a break down at the start of the third set.

After Fognini roused himself once more to break back for 3-3, there followed a hugely entertaining seventh game that decided the match.

Berdych grabbed a break point when a foot fault contributed to a Fognini double fault but after flinging his racket to the ground in frustration, the Italian saved it with a stunning pass.

There followed a handful of deuces before the disciplined Berdych, who had by now made the conversation about challenges a three-way affair, broke again to take a lead he would not surrender.

ROGER FEDERER vs MARTON FUCSOVICS 2-0 (6-4,7-6,6-2)
Roger Federer reached the Australian Open quarter-finals for the 14th time on Monday but the defending champion did not have everything his own way against 80th-ranked Hungarian Marton Fucsovics.

The 36-year-old Swiss was not at his dazzling best on a sun-bathed Rod Laver Arena but claimed a 6-4 7-6(3) 6-2 to set up a quarter-final against Czech Tomas Berdych.

Fucsovics had never won a main draw grand slam match before arriving in Melbourne but after winning three rounds the 25-year-old produced a skilful and confident performance to keep second seed Federer on his toes for two sets.

There were no real alarms for the Swiss though and he raced away to victory in the third set.

“I thought he played very well, it’s fast conditions so you have to have quick ideas and execute well and he did that very well,” Federer said on court after his first day match of the tournament so far.

“It was only when I had two sets and a break I felt like I had the wind behind my back.”

Federer is the oldest man to reach the quarter-finals of the Australian Open since Ken Rosewall in 1977.

Greeks rally against use of “Macedonia” in Skopje name dispute

Nadal eliminated from ATP Finals, Alcaraz to finish year at No.1