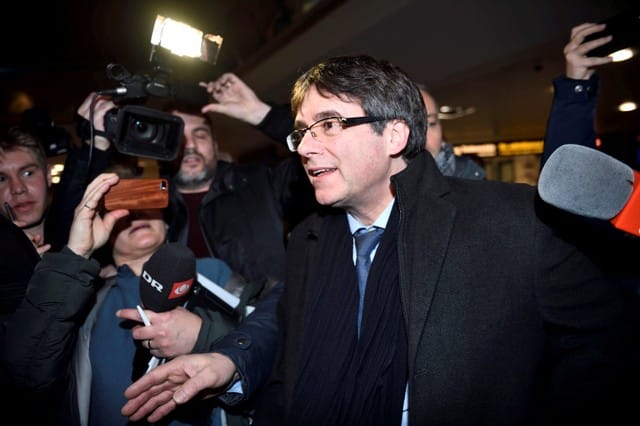 The Catalan parliament on Monday proposed Carles Puigdemont as candidate for president, dealing a blow to central government efforts to derail an independence movement that has plunged Spain into political crisis.

As the legislature’s speaker named Puigdemont as the sole candidate for a position he was fired from in October, Spain’s legal system sought to tighten its net around him.

The state prosecutor in Madrid requested the reactivation of a European arrest warrant to detain him on charges of sedition and rebellion in Copenhagen, where Puigdemont touched down earlier on Monday on his first trip away from Belgium in three months of self-imposed exile.

He fled to Brussels in October after Spain’s central government sacked him for spearheading an independence drive that culminated in an illegal referendum and a unilateral declaration of independence by the Catalan parliament.

“I confirm that the only candidate that has been proposed is Mr. Carles Puigdemont,” said Roger Torrent, the newly-elected separatist speaker at the Catalan parliament.

“I am conscious of the warnings that weigh upon him, but I am also conscious of his absolute legitimacy to be candidate,” said Torrent, calling for dialogue with Madrid to resolve the situation.

Puigdemont argues he could govern the region from exile abroad, an option that Rajoy has ruled out.

A Reuters reporter saw Puigdemont come through customs at Copenhagen airport a little after 0700 GMT and, without being detained, get in a car and leave.

It was not clear where Puigdemont was headed. He is billed to appear at the University of Copenhagen at 2:00pm CET (1:00pm GMT) for a debate on the political situation in Catalonia.

According the Danish parliament’s diary, he has also been invited to a meeting there on Tuesday by Magni Arge, a deputy representing the Faroe Islands, which have their own independence movement seeking secession from Denmark.

Shortly after Puigdemont’s arrival in Copenhagen, Spain’s state prosecution service said it had asked the Supreme Court to reactivate the warrant, on charges of sedition and rebellion, originally issued against him – and later lifted – after he fled to Belgium.

After weeks of uneasy calm, the political crisis triggered by Catalonia’s independence drive flared up again last week when the new regional parliament elected Torrent as speaker at its first sitting.

Despite that tension, Spain’s borrowing costs fell to six-week lows on Monday after credit agency Fitch upgraded its sovereign rating to gave Spain its first “A-” grade since the eurozone debt crisis.

Putin boasts of Russian weapons prowess, says Moscow is ready to share it with allies