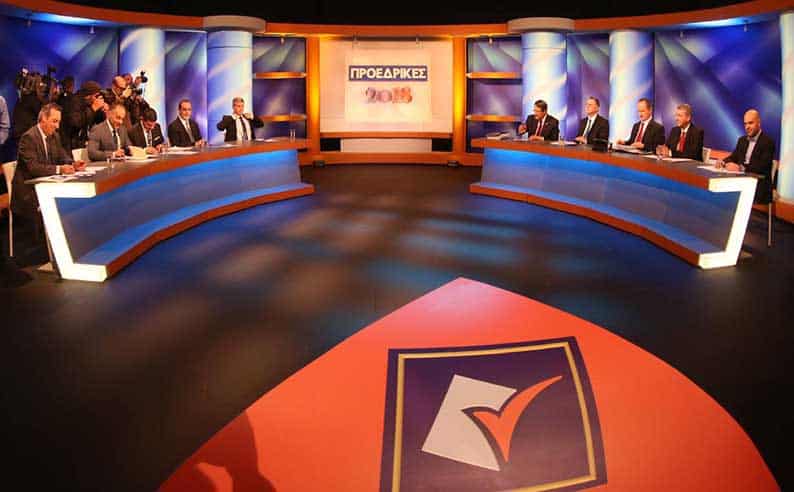 Presidential candidates at the start of the debate

President Nicos Anastasiades said on Monday that no chance had been lost during reunification talks in Switzerland last summer to solve the Cyprus problem, arguing that the Greek Cypriot side wanted a truly independent state.

The president was responding to criticism from Akel-backed candidate Stavros Malas during an evening TV debate between the five main contenders for the presidency ahead of Sunday’s elections.

Malas appeared to gain the upper hand in the first part of the televised debate, which dealt with the Cyprus problem.

“Let us not cultivate a climate that we lost a chance, we haven’t lost any chance,” Anastasiades said of the talks in the Swiss resort of Crans-Montana last July.

Anastasiades reiterated that it was Turkish intransigence that caused the collapse of the talks, citing statements from Greek Foreign Minister Nicos Kotzias.

The Greek Cypriot side wanted a truly independent state without guarantors, the president said.

But Malas cited the UN secretary-general’s statement that a “historic chance has been lost at Crans-Montana” and said it was a position shared by many Greek Cypriots who blame Anastasiades for causing the collapse.

Malas also attacked Diko leader Nicolas Papadopoulos who gave a vague overview of what he planned to do if elected.

Papadopoulos said he would first visit the Greek prime minister and then the UNSG to explain positions, in line with the mandate handed to him by the people, to withdraw existing proposals made by Anastasiades.

“I honestly believe we can convince people abroad,” he said, accusing Anastasiades of making too many concessions.

However, Malas wondered what Papadopoulos would tell the Greek premier when Alexis Tsipras himself believes that the problem must be resolved soon to avoid worse developments.

“Tell him what? Mr Tsipras said a bizonal, bicommunal federation is the basis of the talks and we need to continue immediately based on this,” Malas said.

He said that form of solution was a catastrophe and a referendum should be held for the people to decide if that was the way forward.

Far right Elam leader Christos Christou said the solution favoured by his party was that of a unitary state.

He said the Cyprus problem had to be repositioned as a problem of invasion and occupation and not a bicommunal issue.

Anastasiades had to defend his government’s achievements in the second part of the debate, which delved into domestic affairs and the economy.

He was asked what new product his administration had created, with the journalist suggesting the so-called “success story” was mainly based on selling passports to make a quick buck and risking creating another property bubble in the process.

“You can’t even register halloumi,” Giorgos Kaskanis told the president.

The president argued that other expediencies were to blame for the delay in registering halloumi, and that the progress achieved following the 2013 collapse was owed to the right incentives provided by the government, which attracted €7bn in investment, including the creation of a casino resort and marinas.

Some 7 per cent of GDP came from the education sector, he said.

He said recovery of the construction industry was not just owed to the sale of passports. “There’s wider activity.”

Papadopoulos found himself in a bit of a pickle when it was noted that he had been criticised for making promises on the economy that were near impossible to fulfill.

The reporter then said that according to his capital statement, he owned immovable property worth €2m, a gift from his parents, and since 2007 he had an income of €12,000 with just around €25,000 in the bank.

“Is this a standard the people can look up to and trust you with the management of the country’s economy?”

Papadopoulos sought to tiptoe around the question, saying that the elections were about proposals and his would put Cyprus on the right track.

He said the island could become a hub for startups, adding that it spent the least in the sector in the EU.

Papadopoulos said his proposals would improve quality of life, restore the middle class and reimburse those who lost money during the crisis.

He insisted that his proposals were costed and that he would use the primary surplus and EU programmes to give back to those who lost money in banking crisis.

As expected, Malas was the recipient of a large amount of flak in this area because of his participation in the Christofias administration, which is widely blamed for the economic collapse. Papadopoulos suggested that if elected, he would implement the same policies that led Cyprus to bankruptcy in 2013.

Malas sought to distance himself, arguing that he had been health minister for 14 months while Diko, Papadopoulos’ party, had been a coalition partner for three years.

“Let me be judged for my work as the health minister. The previous government was judged, it’s over,” he said.

He accused Anastasiades of not giving any extra cash for research and development and used a tweet the president sent about the casino being a decades-old vision against him.

“A casino is not a vision.”