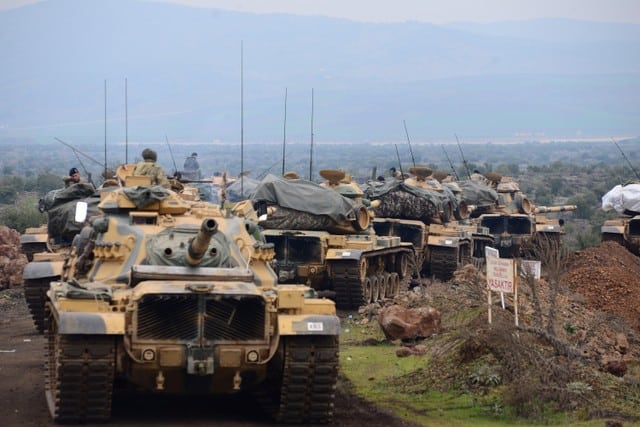 Turkey shelled targets in north-west Syria on Monday and said it would swiftly crush the US-backed Kurdish YPG fighters who control the Afrin region in an air and ground offensive that President Tayyip Erdogan said Russia had agreed to.

Amid growing international concern over the three-day-old military operation, President Tayyip Erdogan said there would be “no stepping back” from the campaign, which has opened up a new front in Syria’s complex civil war.

Turkish forces and their Syrian rebel allies began their push to clear YPG fighters from the northwestern enclave on Saturday, despite concern from the United States, which urged both sides on Monday to show restraint.

France called for an emergency meeting of the United Nations Security Council on Monday to discuss the fighting in Afrin and other parts of Syria, and Britain said it would look for ways to prevent any further escalation.

But Erdogan said Turkey was determined to press ahead. “There’s no stepping back from Afrin,” he said in a speech in Ankara. “We discussed this with our Russian friends, we have an agreement with them, and we also discussed it with other coalition forces and the United States.”

Moscow, a military ally of President Bashar al-Assad that operates a major air base in Syria, has not confirmed giving a green light to the campaign – which Syria has strongly objected to – but did not appear to be acting to prevent it.

The YPG’s Afrin spokesman, Birusk Hasaka, said there were clashes between Kurdish and Turkish-backed forces on the third day of the operation, and that Turkish shelling had hit civilian areas in Afrin’s northeast.

The US-backed Syrian Democratic Forces (SDF), dominated by YPG fighters, said they might send reinforcements to Afrin, and called for international efforts to halt the attack.

Ankara considers the YPG a terrorist group tied to Kurdish insurgents in Turkey, and has been infuriated by US support for the YPG in the battle against Islamic State in Syria — one of the issues that have brought relations between the United States and its Muslim Nato ally close to breaking point.

Erdogan has also pledged to drive the SDF from the town of Manbij to the east, part of a much larger area of northern Syria controlled by the SDF, which led the US-backed campaign to defeat Islamic State in its Syrian strongholds last year.

That raises the prospect of protracted conflict between Turkey and its allied Free Syrian Army factions against the US-backed SDF.

“Our investors should be at ease, the impact will be limited, the operation will be brief and it will reduce the terror risk to Turkey in the period ahead,” Simsek, who oversees economic affairs, said in Ankara.

A senior Turkish official declined to give a timeframe but said the operation would “move fast”, adding that Turkey believed there was some local support for its action in both Afrin and Manbij.

YPG official Nouri Mahmoud said Turkish-backed forces had not taken any territory in Afrin. “Our forces have to this point repelled them and forced them to retreat,” he told Reuters.

A Turkish official said Turkish troops and Free Syrian Army fighters had begun to advance on Afrin’s eastern flank, taking control of Barshah hill, northwest of the town of Azaz.

A Reuters cameraman near Hassa, across the border from Afrin, saw Turkish shelling on Monday morning. Dogan news agency said Turkish howitzers opened fire at 1 a.m. (2200 GMT), and that YPG targets were also being hit by Turkish warplanes and multiple rocket launchers.

Turkey sees the YPG presence on its southern border as a domestic security threat. Defeating it in Afrin would reduce Kurdish-controlled territory on its frontier and link up two regions controlled by insurgents opposed to Assad – Idlib province and an area where Turkey fought for seven months in 2016-17 to drive back Islamic State and the YPG.

The Turkish-backed FSA factions, which have come together under the banner of a newly branded “National Army”, also want to see an end to YPG rule in Afrin.

They accuse the YPG of displacing 150,000 Arab residents of towns including Tel Rifaat and Menigh to the east of Afrin, captured in 2016.

“This is a historic moment in our revolution,” Mohammad al-Hamadeen, a senior officer in the FSA forces, told fighters in Azaz on Sunday as they prepared to join the ground offensive.

“God willing, very soon we will return to our region that we were driven from two years ago.”

Throughout most of the multi-sided seven-year-old civil war in Syria, Turkey and the United States jointly backed Arab fighters seeking to overthrow Assad. Since 2014, Washington has angered Turkey by growing closer to the Kurdish militia, which it supported with air strikes, arms, training and special forces advisers on the ground to oppose Islamic State.