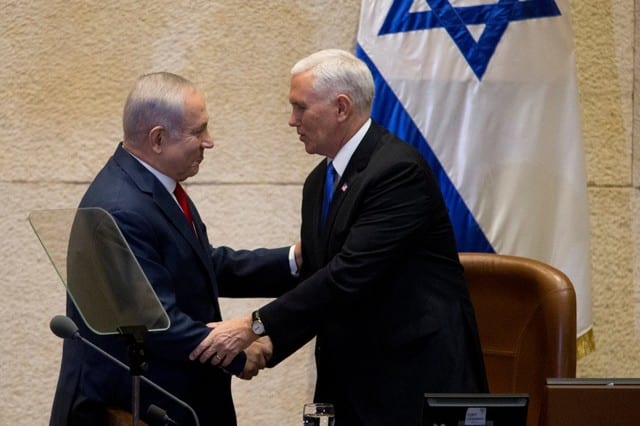 US Vice President Mike Pence shakes hands with Israeli Prime Minister Benjamin Netanyahu ahead of his address to the Knesset, Israeli Parliament, in Jerusalem

The US Embassy in Israel will move to Jerusalem by the end of 2019, US Vice President Mike Pence said in a speech to the Israeli parliament on Monday that highlighted a policy shift that has stoked Palestinian anger and international concern.

President Donald Trump last month recognised Jerusalem as the capital of Israel and said he would move the US Embassy there – dismaying Palestinians who claim the eastern part of the city and angering Arab states across the region.

“Jerusalem is Israel’s capital – and, as such, President Trump has directed the State Department to immediately begin preparations to move the United States Embassy from Tel Aviv to Jerusalem.”

The speech was briefly disrupted, at the outset, by Israeli Arab parliament members who held up protest signs in Arabic and English, reading “Jerusalem is the capital of Palestine”, and were ejected by ushers.

Pence responded to the fracas by saying with a smile: “It is deeply humbling for me to stand before this vibrant democracy.”

Though shunned by the Palestinians, the Trump administration says it remains committed to helping them and Israel negotiate a peace deal. Those talks have been stalled for almost four years.

Responding to Pence‘s speech, Nabil Abu Rdainah, a spokesman for Palestinian President Mahmoud Abbas, said: “If the United States wanted to a play a role of a mediator in the peace process it must be a fair mediator and it must abide by (international) resolutions.”

Palestinians seek East Jerusalem, including the walled Old City with its holy sites, as the capital of their own future state. Israel, which annexed East Jerusalem after capturing it in 1967 in a move not internationally recognised, regards all of the city as its “eternal and indivisible capital”.

Pence, who visited Egypt and Jordan before travelling to Israel, said that with its policy shift on Jerusalem, “the United States has chosen fact over fiction – and fact is the only true foundation for a just and lasting peace”.

It was the highest-ranking visit by a US official to the region since Trump’s Jerusalem declaration and gave Pence and Netanyahu an opportunity to highlight their own warm relationship for a conservative Christian American community that serves as a power base for the US administration.

Pence, an evangelical Christian, drew parallels between Jewish history dating back to biblical times and the European pilgrims who founded the United States. He was greeted with ovations by Israeli legislators throughout his speech.

Noting that Israel will in May mark 70 years since its founding – in a war Palestinians mourn as a catastrophe – Pence switched to Hebrew to recite a Jewish prayer of thanksgiving.

Welcoming Pence to the parliament, Netanyahu said he was the first US vice president to have been accorded the honour.

Israel and the United States “are striving together to achieve a true peace, lasting peace, peace with all our neighbours, including the Palestinians,” Netanyahu said.