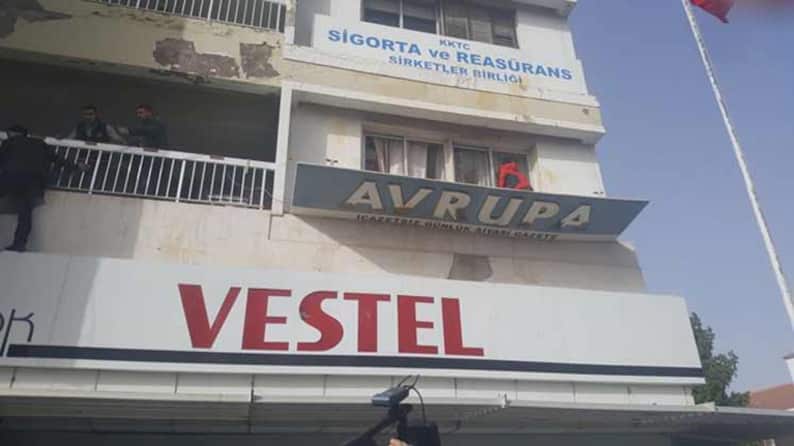 Afrika sign being torn down. The paper was formerly known as Avrupa (Europe)

Following violent protests against Afrika on Monday, the daily in its headline, alleged the demonstrators “came to kill” heeding “orders from a high place”, while most party leaders complained of a lack of security.

“On the orders of Tayyip Erdogan, yesterday, a Sivas Madimak exercise took place against our newspaper Afrika,” the daily said.

“They hit, broke and called for the place to be lit up in flames. The police just watched. Our politicians stayed silent to this historic lynching attempt.”

Afrika was referring to the Sivas massacre which was an arson attack on mostly Alevi intellectuals inside the Turkish city’s Madimak Hotel staged by radical Islamists that killed 33 intellectuals and two hotel workers.

Monday’s violent protests in Nicosia were sparked by Afrika’s Sunday headline which likened Turkey’s Afrin operation in Syria to Ankara’s occupation of the north.

Some in the crowd threw stones and eggs at the building, breaking windows and tried to enter the newspaper, forcing those inside to barricade themselves in. Two flag-waving protesters also managed to climb on top of the ‘parliament’.

Most party leaders highlighted a lack of security in the country following their one-on-one meetings with Turkish Cypriot leader Mustafa Akinci to discuss the results of the January 7 election.

CTP leader Tufan Erhurman said everyone wanted a democracy they could feel proud of and that yesterday’s events were not what the Turkish Cypriot people deserved.

“It was very clear yesterday security was weak, in front of the newspaper as well as the parliament,” Erhurman said, calling for the police the take precautions and for the issue to be looked into.

People’s Party leader Kudret Ozersay said the events that took place on the first day of ‘parliament’ were a “black stain” for the country that hurt everyone.

“Nobody has the right to take such violent actions. We believe there is a very serious security weakness,” he said.

The former chief negotiator for the Turkish Cypriot side called for the instigators of the violence to be punished. “The lynch culture that has no place in our country needs to be stopped.”

Communal Democracy Party leader Cemal Ozyigit complained that the police were being selective in their security arrangements.

“When our youth went out on the streets, the riot police formed a wall around them. When there were protests over the car crash on the mountain road, they pushed them back,” Ozyigit said, referring to previous protests.

“There was a lynching attempt yesterday, but the riot police were nowhere to be seen. Only when the president stepped in did they arrive.”

“There is a real security weakness in this country and this needs to be addressed,” Ozyigit said.

‘Prime minister’ and National Unity Party leader Huseyin Ozgurgun said the events that took place in the ‘parliament’ yesterday were against the constitution. He also praised the police for their “cool-headedness.

“I trust our police’s experience on this issue. If the police intervened early, it could have gotten much worse,” he said.

Ozgurgun said the judicial authorities would be taking action over the events that took place on Monday.