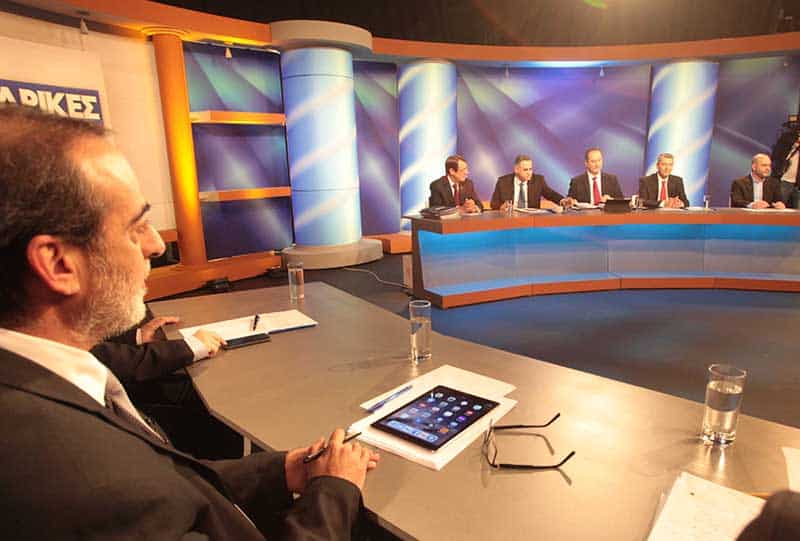 Monday evening’s televised debate among the five main contenders for the presidency offered no new reveals or high drama as the candidates played it safe, sticking to the script and to their respective narratives.

An online straw poll hosted on the website of daily Politis showed Akel-backed Stavros Malas was the most persuasive (42 per cent), followed by president Nicos Anastasiades with 33 per cent. Diko’s Nicolas Papadopoulos got 13 per cent in this metric, followed by Giorgos Lillikas and Elam’s Christos Christou with 4 per cent each.

Malas made a good impression, and was relaxed throughout. A highlight was when he stated categorically that he would not be seeking the support of far-right Elam between the first and second round of voting – the only candidate to do so.

The candidates avoided making major blunders, although Papadopoulos was taken to task about his assertion that natural gas prices have skyrocketed. It was his dig at the government, which Papadopoulos criticised for not being more proactive in commercialising Cyprus’ gas finds now that prices were up.

When he was told that at any rate Noble Energy does not consider current gas prices to be viable for production, a defensive Papadopoulos shot himself in the foot, saying: “So the Republic of Cyprus must wait on the companies to sell the gas?”

On Tuesday, Papadopoulos’ chief staffer Chrysis Pantelides tried to limit the damage by insisting the Diko leader had got his facts right.

Speaking on Cybc radio for a post-mortem on the debate, Pantelides said that oil currently goes for $60 per barrel, whereas in 2015 it was priced at $28.

He was implying therefore that natural gas prices are also rising, as they are largely linked to oil prices.

However, this is not true where Europe is concerned, an energy analyst explained to the Cyprus Mail.

According to Charles Ellinas, in European markets gas-to-gas pricing is used in a number of trading hubs. The largest gas trading hub in Europe is the TTF, based in the Netherlands.

Gas prices have only slightly increased in recent months due to higher demand during the winter.

Moving on to another point, Diko’s Pantelides went on to claim that Anastasiades performed poorly in the debate.

He cited Anastasiades’ frequent fidgeting with his papers, which showed that the incumbent had come unprepared.

Pantelides then took the argument forward: “Anastasiades was unprepared in the debate, just as he was unprepared during the [2013] Eurogroup, and likewise in Crans-Montana, where he went to discuss security and guarantees but ended up making concessions on the internal aspects of the settlement.”

One by one the candidates’ aides paraded on radio and television programmes proclaiming that their man had put their point across well.

The debate was held in CyBC’s studios. As is the custom, prior to the main event the rival teams chatted, joked and teased one another.