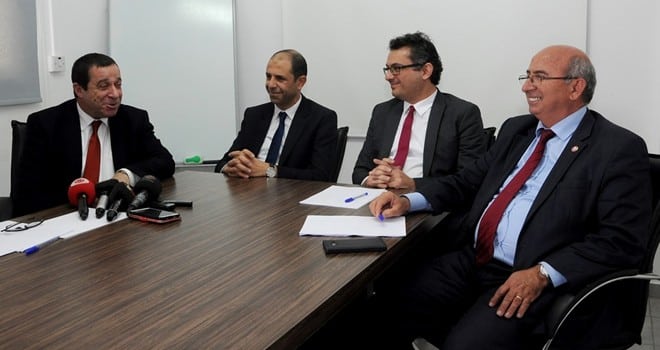 Democratic Party leader Serdar Denktash on Wednesday said he was being pressured into forming a three-way coalition including the National Unity Party (UBP) and the Rebirth Party (YDP).

Speaking after another inconclusive meeting for an alternative four-way coalition including the Republican Turkish Party (CTP), the People’s Party (HP) and the Communal Democracy Party (TDP), Denktash said he agreed with UBP leader and ‘prime minister’ Huseyin Ozgurgun’s “forced governments are problematic” statement, but Ozgurgun was the one attempting to form a “forced coalition”.

The CTP, the HP, the TDP and the Democratic Party (DP) are holding talks on trying to form a ‘government’. In total they would have 27 seats out of 50.

The three-way coalition would be possible with UBP, DP and YDP which is mainly composed of Turkish settlers. This set up would consist of 26 seats.

Denktash is thought to be wary of this combination after the difficulties he faced with the UBP in the previous ‘government’ and the implications of being associated with the ultranationalist YDP which mainly consists of Turkish settlers.

Ozgurgun was handed the task of forming a ‘government’ on Wednesday by Turkish Cypriot leader Mustafa Akinci after his UBP came first in the January 7 election with 21 seats. Ozgurgun now has 15 days to form a coalition, failing that he will have to return the task to Akinci.

Ozgurgun has criticised the four-way coalition talks saying it went against the will of the people and called it a ‘civillian coup’.

“It will be very difficult to try and form a government while there is this four-way coalition attempt going on,” he said.

“We will reach out to all parties. I will consult our party but I plan to speak to CTP first,” Ozgurgun added.

CTP leader Tufan Erhurman responded by saying they had an understanding within his party not to form a coalition with the UBP but “If they want to come and pay us a visit, we will host them. Ozgurgun can come have a coffee if he wishes.”

CTP and HP and TDP have all ruled out forming a ‘government’ with Ozgurgun’s UBP, leaving Denktash’s DP as the kingmakers. He has previously indicated his willingness to talk to the UBP as well.

Denktash said the four-way talks were progressing well and that they would pick up on Thursday, holding two further meetings. He said they were disturbed by the attempts at division in the country and would do what is necessary to prevent this. He added they hoped to reach a conclusion in the coming days.