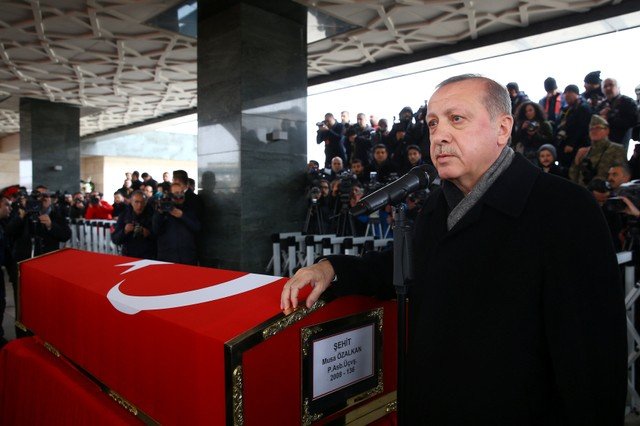 Turkey's President Tayyip Erdogan speaks next to a flag-wrapped coffin of Musa Ozalkan, a Turkish soldier who was killed during the operation against Syria's Afrin region, in Ankara

President Tayyip Erdogan warned on Wednesday that Turkey would extend its military operation in Syria to the town of Manbij, a move that could potentially bring Turkish forces into confrontation with those of their Nato ally the United States.

Turkey’s air and ground operation, now in its fifth day, targets US-backed Kurdish YPG fighters in the Afrin region and has opened a new front in Syria’s multi-sided civil war. A push towards Manbij some 100km east of Afrin could threaten US plans to stabilise a swath of north-east Syria.

Turkish forces and their rebel allies launched Operation Olive Branch in Afrin because Ankara sees the YPG as an extension of a militant Kurdish group that has waged a three-decade insurgency in Turkey’s largely Kurdish south-east.

“With the Olive Branch operation, we have once again thwarted the game of those sneaky forces whose interests in the region are different,” Erdogan said in a speech to provincial leaders in Ankara.

“Starting in Manbij, we will continue to thwart their game.”

Differences over Syria policy have already strained Turkey’s relations with Washington almost to breaking point. For the United States, the YPG is a key ally against both Islamic State jihadists and Syrian President Bashar al-Assad’s forces.

A Turkish operation in Manbij would be fraught with risk due to the presence of US military personnel in and around the town. They were deployed there last March to deter Turkish and US-backed rebels from attacking each other and have also carried out training missions in Manbij.

President Donald Trump plans to raise the US concerns over the Turkish offensive in a telephone call with Erdogan expected on Wednesday, a senior US official said.

In an interview with Reuters, Turkey’s government spokesman said he saw a small possibility that Turkish forces could come face-to-face with the US troops in Manbij.

US-backed Syrian fighters in the Manbij area have deployed to frontlines to confront any Turkish assault and are in contact with the US-led coalition over defending the town of Manbij, their spokesman Sharfan Darwish said on Wednesday.

“We are in full readiness to respond to any attack.”

Dozens of combatants have been killed since Turkey launched its offensive, the Syrian Observatory for Human Rights said, citing sources on all sides.

Turkish shelling and airstrikes in Afrin have killed 28 civilians, while two civilians were killed near the Syrian opposition-held town of Azaz as a result of shelling by the YPG, the Britain-based monitoring group said.

Turkey said three of its soldiers had been killed. Observatory head Rami Abdulrahman said 48 Turkey-backed Syrian fighters with Free Syrian Army groups had been killed and the death toll among the Kurdish YPG so far stood at 42, he said.

The Turkish military said late on Tuesday it had killed at least 260 Kurdish fighters and Islamic State militants in the offensive. The US-backed Syrian Democratic Forces (SDF), which is spearheaded by the YPG, rejected that account, saying Islamic State is not present in Afrin, and it accused Turkey of greatly exaggerating the number of casualties.

Turkish troops and allied Syrian fighters have been trying to take the summit of Bursaya Hill, overlooking the eastern approach to Afrin town.

“Turkey has not been able yet to shore up its control over any of the villages it has advanced on,” said the Observatory’s Abdulrahman. He attributed this to fierce resistance from YPG fighters who are from Afrin, and the hilly terrain of the area.

In 2016, the SDF pushed Islamic State fighters out of Manbij. Erdogan has accused the United States of reneging on a promise to ensure that the town would return to Arab control.

US, British and German volunteers who fought Islamic State alongside Kurdish-led forces in Syria are also now in the Afrin area to help confront Turkey, the SDF said.

The United States has hoped to use the YPG’s control of the area to give it the diplomatic muscle it needs to revive UN-led talks in Geneva on a deal that would end Syria’s civil war and eventually lead to Assad’s removal.