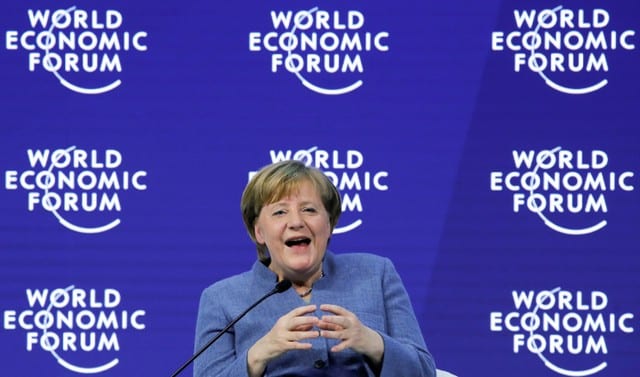 The leaders of Germany and Italy warned at the World Economic Forum in Davos on Wednesday against a return to nationalism and protectionism, with Angela Merkel evoking the two world wars and openly questioning whether the world had learned from them.

The speeches, given in quick succession, came one day before US President Donald Trump arrives at the annual gathering of the global elite in the Swiss Alps to promote his “America First” policies.

Trump has pulled the United States out of international agreements on trade and climate since taking power one year ago, unsettling countries in Europe and Asia who have looked to Washington to help shape global rules since World War Two.

“We are seeing nationalism, populism and in a lot of countries a polarised atmosphere,” Merkel told a packed auditorium where French President Emmanuel Macron will speak later on Wednesday and Trump on Friday.

“We believe that isolation won’t help us. We believe we need to cooperate, that protectionism is not the answer,” she said, asking: “Have we really learned from history, or haven’t we?”

Italian Prime Minister Paolo Gentiloni, asked what his message to Trump was, offered a defence of multilateral cooperation and warned against steps to undermine that.

“It is totally legitimate, understandable, the desire for political leaders to defend their own citizens, their own companies, their own economy,” he said. “I respect that, but obviously there is a limit.”

The scene in Davos of two of the former Axis powers in World War Two cautioning the United States against nationalism was a sign of how much Trump’s election has unsettled governments in Europe and altered the relationships that have existed since the war.

Still, after suffering a series of crises over the past decade – from euro turmoil, to Ukraine, refugees and Brexit – Europe is feeling confident again.

Its economy has rebounded and the election of pro-European centrist Macron in France has injected new momentum into efforts to reform the European Union.

Merkel, weakened by an inconclusive German election in September which has given way to months of political limbo as she tries to form a coalition, urged Europe to complete its banking union project, make progress on a single digital market and take steps to shield the bloc from future crises.

“Europe must take its fate into its own hands,” she said, echoing a message she sent after a contentious Group of Seven summit with Trump back in May.

She said Germany and its European partners wanted a “good partnership” with Britain after it leaves the EU, but said it was up to London to decide what kind of link it wanted and said there could be no concessions on core EU principles.

“Being a member of the single market is tied to the principle of free movement. On that we can’t make compromises,” Merkel said. “It is up to Britain to tell us how close a partnership they want. We are open to every kind of partnership.