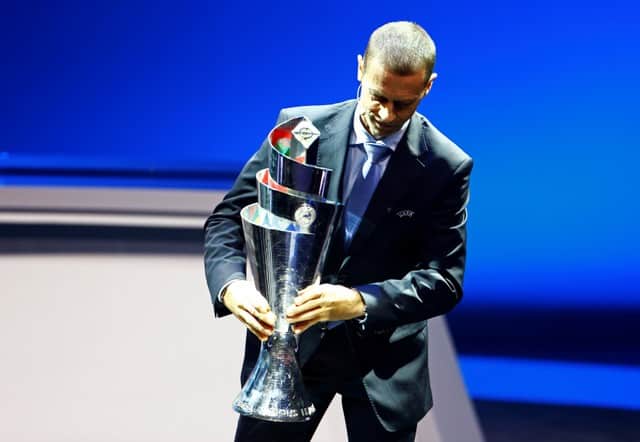 UEFA president Aleksander Ceferin with the trophy during the draw in Lausanne, Switzerland

Germany will face old rivals France and the Netherlands after the trio were drawn together in the same three-team group for the inaugural UEFA Nations League on Wednesday.

The three will feature in Group One of League A, the top division of the four-tier tournament that UEFA has introduced to replace international friendlies.

UEFA, concerned that international football is losing popularity to the club game, has said that the league will provide the top nations with more competitive matches against each other.

However, critics say the competition is too complex, adds to an already overcrowded calendar and, because it provides an additional path to major tournaments, makes it too easy for the top teams to qualify.

Italy, who failed to qualify for this year’s World Cup finals, will face European champions Portugal and Poland in Group Three while Spain take on England and Croatia in Group Four. Belgium will meet Switzerland and Iceland in Group Two.

The winners of each group qualify for the semi-finals, which will be played in June 2019, followed by the final.

The Nations League features all 55 of Europe’s national teams divided into four divisions that are each split into four groups.

Although the new competition is played in addition to the European championship qualifying competition, which will go ahead as usual, it provides a back door to Euro 2020 with one team from each league earning a place at UEFA’s flagship tournament.

League B, the second tier, brings a clash between neighbours Czech Republic and Slovakia in Group One. Ireland must face Denmark, who beat them in last year’s World Cup playoffs, in Group Four, which also features Wales.

Cyprus are in Group C and have been drawn in Group Three alongside Slovenia, Norway and Bulgaria.