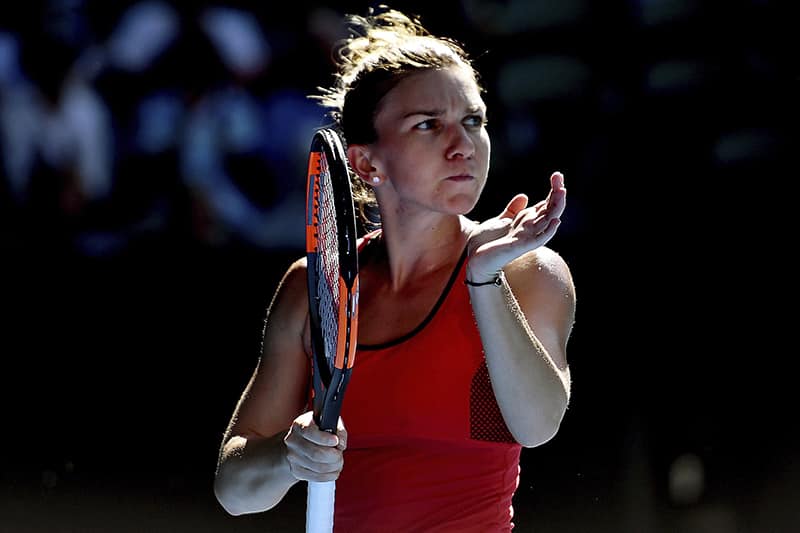 ANGELIQUE KERBER vs MADISON KEYS 2-0 (6-1,6-2)
Revitalised 2016 champion Angelique Kerber made a major statement of intent as she stormed into the semi-finals of the Australian Open with a dominant 6-1 6-2 victory over Madison Keys on Wednesday.

Making a mockery of the 21st seeding she landed after a miserable 2017, the former world number one outplayed Keys in almost every facet of the 51-minute match to seal a semi-final date with Simona Halep or Karolina Pliskova.

“I was just playing my game, I was not thinking a lot about winners or errors, I was staying in the moment and trying to play every single point,” a beaming Kerber said on Rod Laver Arena.

“I just went out and played like I’ve been playing all week. Just playing my game and enjoying it. I’m just happy to get through and be here in the semis.”

In an echo of her loss to compatriot Sloane Stephens in the final of last year’s U.S. Open final, Keys appeared to be struck by stagefright and offered none of the power and accuracy that got her to the last eight without losing a set.

Keys started the match with three unforced errors and a netted backhand to lose her first service game and barely 15 minutes were on the clock before the German had another break in the bank and a 4-0 lead.

The 22-year-old tried charging the net in a desperate attempt to kickstart her game but a brilliant backhand pass from Kerber brought up two set points and the stanza was hers in 22 minutes when the 17th seed sent a forehand long.

The American briefly came to life to hold for 3-1 in the second set and then unleashed a couple of bombs to put the set back on serve on a Kerber error after a lengthy rally.

A 21st unforced error from the racket of Keys gave Kerber the break straight back, however, and the 30-year-old sealed her place in the last four with a third of the set when the American netted a backhand.

“I think she played really well. I felt like I was trying different things but I wasn’t playing very consistent,” said Keys.

“I think in the first set I played really passive, and because of that I feel like I wasn’t moving as well, wasn’t accelerating.

“Sometimes you just don’t play very well out there.”

It has been quite a return to form for Kerber in Australia this year after she broke a 27-tournament title drought going back to her 2016 U.S. Open triumph in the Sydney International warm-up.

Kerber, who celebrated her 30th birthday last week, is now guaranteed to return to the top 10 in the rankings even if she goes no further at Melbourne Park.

“I am just happy actually.”

SIMONA HALEP vs KAROLINA PLISKOVA 2-0 (6-3,6-2)
Top seed Simona Halep recovered from a slow start before racing away to a 6-3 6-2 victory over Czech sixth seed Karolina Pliskova in their Australian Open quarter-final on Wednesday.

The 26-year-old Romanian world number one, still without a grand slam title, trailed 3-0 but battened down the hatches to reel off the next nine games on her way to a first Melbourne semi-final.

An increasingly deflated Pliskova eventually stopped the rot but with Halep offering precious little in the way of cheap points, the result soon became a formality.

Halep made only 10 unforced errors in the one hour, 11 minute contest on Rod Laver Arena and sealed victory with a punishing return to the baseline which the big-serving Pliskova could only slap into the net.

The Romanian advances to face 2016 champion Angelique Kerber in the semi-finals after the German crushed American Madison Keys earlier on Wednesday.

“It’s nice to be in the semis,” Halep, coached by Australian Darren Cahill, said on court.

“I started to open the court and get a read on her serve.”