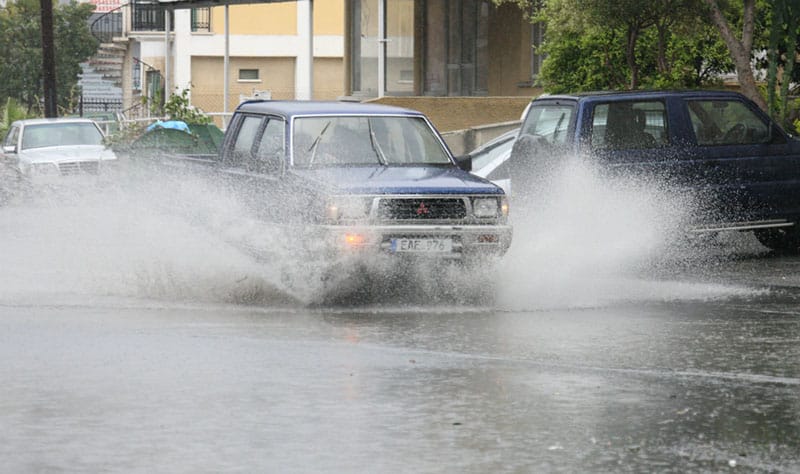 Drivers in Paphos must drive with caution as heavy downpours have caused flooding and areas of standing water are affecting many roads in the town, according to officials.

So far, emergency services have been called out to three instances of flooding, according to the local fire station chief, who said crews responded immediately.

“One team was dispatched to each incident and used pumps and hoses to remove water which had flooded into the buildings,” he told the Cyprus Mail.

The first incident saw the new court building in the centre of the town, which is currently under construction, being pumped free of water and the other two cases involved basements of houses in the town, he said.

“I have seen many cars aquaplaning and I also ask that they think of pedestrians as I have already been soaked by a truck that was driving fast and covered me with water,” he said.

By midday Thursday, no road accidents had been reported due to the inclement weather, said head of Paphos traffic police Zenon Psathitis.

“Luckily there haven’t been any incidents, but people must drive with caution and care and travel at a slow speed, with lights on if necessary,” he said.

A number of small streams and previously dry river beds are also inundated with water according to residents, in particular, a popular minor road in Chlorakas village used as a ‘cut through’ to Moutallos was flooded after a small river burst its banks.

Local resident Jane Caldwell said it is dangerous and that along with many other drivers, she had to find another route for home.

“The road is raised here above the river bed and I couldn’t see the edges. It’s very dangerous so I had to reverse and go back the way that I came. The road should be closed by the authorities until it is safe to pass,” she said.

According to the met office, local showers and isolated thunderstorms are forecast across the island until tomorrow afternoon; Saturday will be mainly fine.