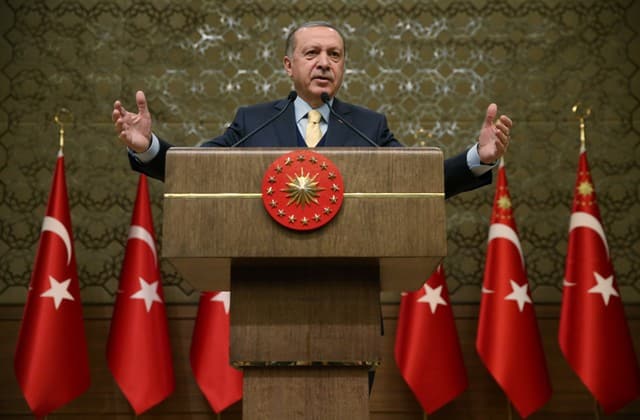 Turkish President Erdogan speaks during a meeting in Ankara

Turkey urged the United States on Thursday to halt its support for Kurdish YPG fighters or risk confronting Turkish forces on the ground in Syria, some of Ankara’s strongest comments yet about a potential clash with its Nato ally.

Turkey’s targeting of the YPG, which it views as a security threat, has opened a new front in Syria’s multi-sided civil war.

Any push by Turkish forces towards Manbij, part of a Kurdish-held territory some 100km east of Afrin, could threaten US plans to stabilise north-east Syria and bring them into direct confrontation with US troops deployed there.

“Those who support the terrorist organisation will become a target in this battle,” Deputy Prime Minister Bekir Bozdag said.

“The United States needs to review its soldiers and elements giving support to terrorists on the ground in such a way as to avoid a confrontation with Turkey,” Bozdag, who also acts as the government’s spokesman, told broadcaster A Haber.

The United States has around 2,000 troops in Syria, officially as part of an international, US-led coalition against Islamic State. Washington has angered Ankara by providing arms, training and air support to Syrian Kurdish forces that Turkey views as terrorists.

US forces were deployed in and around Manbij last March to deter Turkish and US-backed rebels from attacking each other and have also carried out training missions in the area.

US President Donald Trump urged Erdogan on Wednesday to curtail the military operation in Syria, the White House said.

However Turkey has disputed that characterisation of the conversation.

“President Trump did not share any ‘concerns about escalating violence’ with regard to the ongoing military operation in Afrin,” a Turkish official said.

“The two leaders’ discussion of Operation Olive Branch was limited to an exchange of views,” the official said.

Six days into the campaign, Turkish soldiers and their Free Syrian Army rebel fighter allies have been battling to gain footholds on the western, northern and eastern flanks of Afrin.

They appear to have made only limited gains, hampered by rain and clouds, which have limited the air support.

Turkish warplanes struck the northern borders of Afrin, in tandem with heavy artillery shelling, and one civilian was killed, according to the the Syrian Observatory for Human Rights, a Britain-based monitoring group.

Dozens of combatants and more than two dozen civilians have been killed so far since Turkey launched the offensive, the Observatory has said.

The Turkish military said in a statement it had killed 303 militants in northern Syria since the operation started.

The Syrian Democratic Forces (SDF), a YPG-dominated umbrella group backed by the United States in the fight against Islamic State, has previously said that Turkey was exaggerating the number of the dead.

Relations between Ankara and Washington have neared breaking point in recent months over the US support for the YPG and other issues.

Ankara considers the YPG to be an extension of the outlawed Kurdistan Workers Party (PKK), which has waged a three-decade insurgency in Turkey’s largely Kurdish south-east. Washington sees the YPG as an effective partner in the fight against Islamic State in Syria.

The US-led coalition helped the Syrian Democratic Forces (SDF), which is spearheaded by the YPG, to drive Islamic State from Manbij in 2016.

Turkey said the United States had proposed a 30 kilometre “safe zone” along the border with Syria.

“(But) in order for us to discuss the security zone or any other issue with the US, we have to reestablish trust,” Foreign Minister Mevlut Cavusoglu told reporters.

The Afrin operation has also triggered some concern in Germany, another Nato ally, where the caretaker government said on Thursday it would put on hold any decision on upgrading Turkey’s German-made tanks.

Turkey’s use of the Leopard 2 tanks in Afrin has fuelled a debate about Berlin’s approval of arms exports.

Some 2,000 police officers on duty for presidential elections