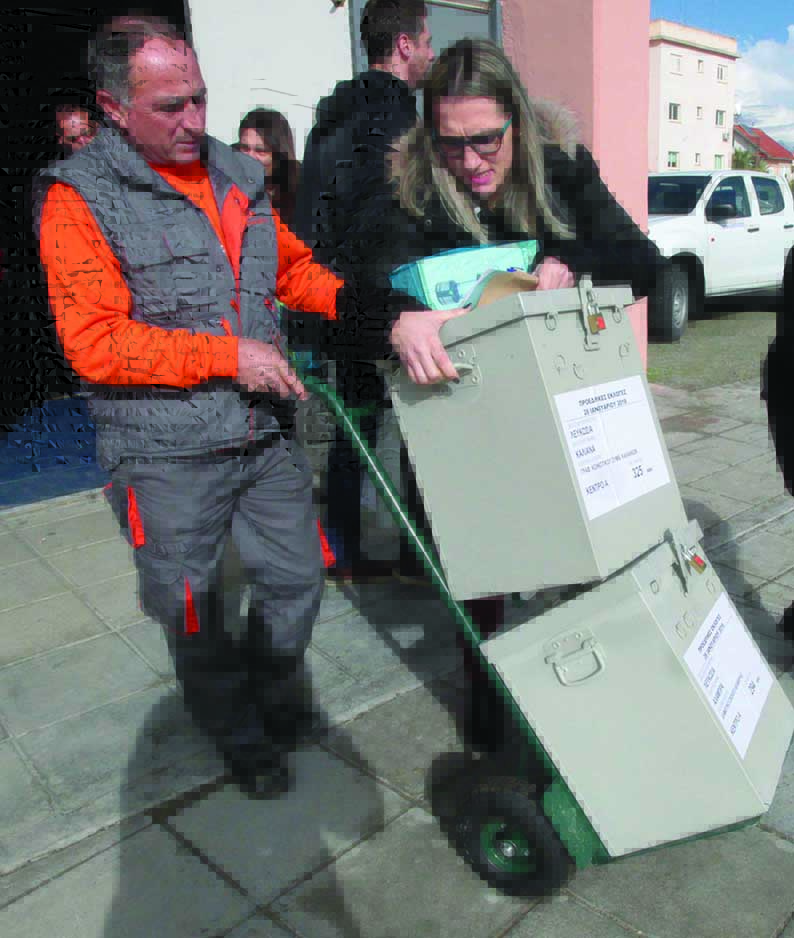 Ballot boxes were delivered on Friday

As election campaigns officially ended at midnight on Friday ahead of Sunday’s presidential election, candidates spent the day making their final pleas to voters.

President Nicos Anastasiades who is running for a second term, in his final message before the elections, urged voters to think about their options.

“Will we continue the steady course ahead or are we headed to uncertainty, a result of experimentation?”.

He added that society has experienced the results of his administration which were the product of collective effort.

“Despite the challenges we still have to face, we have together achieved growth, stability and, above all, the security to define our future,” he said.

Anastasiades said that the dilemma is very clear: “Are we to continue on what we have achieved for the first time ever in our national issue, or are we headed to dangerous adventures?”.

The president asked voters to back him ‘to ensure that our country will continue to move steadily forward’.

Akel-backed independent candidate Stavros Malas called for unity and pledged to be a president whose administration would treat everyone equally in a modern and just social state.

In his final message, Malas urged voters to show their trust in him and let him lead the way for the next five years on behalf of all Cypriots with vision and courage.

Malas called for unity and for the need to ‘overcome the dividing lines that separated us in the past and look for the many that unite us for tomorrow’.

A united people, he said, can avert the final partition of the country, and ‘pull the economy out of the logic of occasional recovery that favours the few and does injustice to the many’.

Cyprus, he said, as a member of the European Union, ought to get ahead with prudence, seriousness, responsibility and solidarity with the weak, away from improvisations, inconsistency, dangerous handling and unrealistic goals.

Diko leader Nicolas Papadopoulos, in his final message, said that he is the only candidate who can bring about change.

He pointed out to voters that out of his two major opponents, Anastasiades and Malas, one won’t make any changes as he insists staying on the same path, while the other cannot.

Papadopoulos said that he is both willing and able to bring about change with his new strategy for a settlement solution, with a comprehensive plan for growth, and with realistic proposals. He maintains that all of these, along with the ‘strength’ of his generation, will provide solutions to Cypriots’ concerns about ‘loans that drown them, queues in hospitals, difficult everyday life’.

With their votes, he said, he would bring about ‘change, credibility, hope’.

The three parties that back Papadopoulos also statements urging people to give them their votes.

Leader of the Solidarity Movement Eleni Theocharous, citing sources from the US State Department, said that Anastasiades is not expected to win the election.

“We completely agree with the estimations of the state department because, according to our own estimations, Nicolas Papadopoulos, our candidate, will not only make it to the runoff but win the elections,” she said.

Edek leader Marinos Sizopoulos said that change is a mere 48 hours away and that is it in everyone’s hands, as long as they vote for Papadopoulos.

Sizopoulos added that the other two choices, Anastasiades and Malas, will not do. Anastasiades, he said, accepted a haircut on deposits and is trying to absolve himself of this responsibility, while he is not in a position to negotiate the Cyprus problem. Malas, the Edek leader said, cannot be trusted as he was a minister in the administration of Demetris Christofias and took part in most of the ‘dangerous political decisions taken in 2011-2012 that led to the financial collapse of our country’.

The Greens also urged voters to back Papadopoulos, echoing Sizopoulos on the two other options, Malas and Anastasiades.

The head of the Citizens’ Alliance, Giorgos Lillikas, called on members of the public to take their place at the fore and become protagonists by voting for him, against ‘the establishment’.

“I urge you to judge freely who you trust as the most appropriate, the most experienced in taking over the management of the Cyprus problem and pulling our country out of deadlocks, giving prospect and hope,” Lillikas said.

Feeling that he will not make it to the runoff, Lillikas urged those ‘who truly want to end the rule of Anastasiades’ to send into the second round that candidate who can beat him.

If no candidate receives more than 50 per cent of the vote, a run-off vote will take place on February 4.