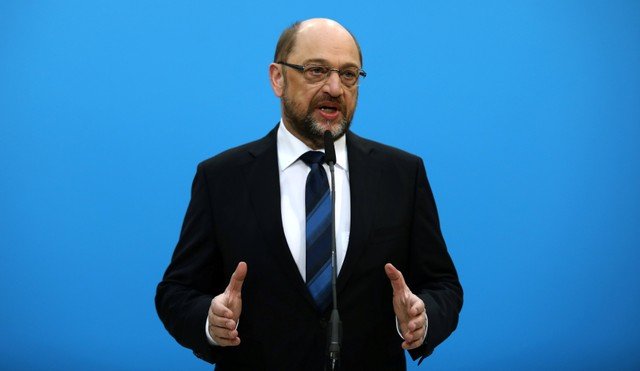 Arriving at her Christian Democrat (CDU) party’s headquarters, Merkel said she was optimistic and determined about the discussions aimed at renewing the “grand coalition” that governed for the past four years.

“People expect us to move towards forming a government and that’s why I’m very optimistic and very determined,” she said. The talks are her best hope of securing a fourth term after the failure of an earlier attempt to form a three-way coalition.

“I believe it is achievable within a reasonable timeframe,” she added.

While most experts expect talks to succeed, many in the SPD are reluctant, seeing a repeat coalition as at best a painful sacrifice by their party for the sake of stability in Europe’s economic and political behemoth.

“Given the challenges from China and the US, the European Union needs a strong, pro-European Germany,” he said. “And that you will only get if the SPD is in government.”

Underlining the stakes for the SPD, one of two “people’s parties” that dominated post-war German history, a poll for ARD television showed only 19 per cent would vote for it in repeat elections, placing it just seven points ahead of the far-right Alternative for Germany (AfD).

Riven by division over whether it would not be better to rebuild in opposition, the SPD’s leadership is under pressure from its radical youth wing to win concessions from the conservatives, on immigration in particular.

The conservatives are wary. They are under pressure from the AfD, which burst into parliament for the first time on Sept 24, propelled by public concerns over Merkel’s decision to openGermany‘s doors to more than a million refugees in 2015.

In a draft agreement the two camps hammered out this month, the parties agreed a soft ceiling of 220,000 immigrants a year, one the Christian Social Union (CSU), arch-conservative Bavarian sister party to Merkel’s CDU, refuses to compromise on.

Despite the tensions, leader Horst Seehofer was positive. “The CSU wants this coalition,” he told reporters on the gloomy Berlin winter morning.

Senior SPD member Democrat Andrea Nahles told broadcaster ARD her party would also push its agenda of eliminating fixed-term contracts without substantive grounds and improving conditions for citizens who pay into the public rather than private healthcare system, seeking concessions on those issues.

Negotiators hope to wrap talks up before carnival season starts in earnest on Feb 8, which would allow a government to be in place by Easter.

But time presses. The SPD membership has been promised a vote on a final coalition deal. With new members thronging to the party in the hope of casting a vote against a new coalition, chances of securing membership consent diminish by the day.

A tale of two stock markets: how London still trumps Paris for investors