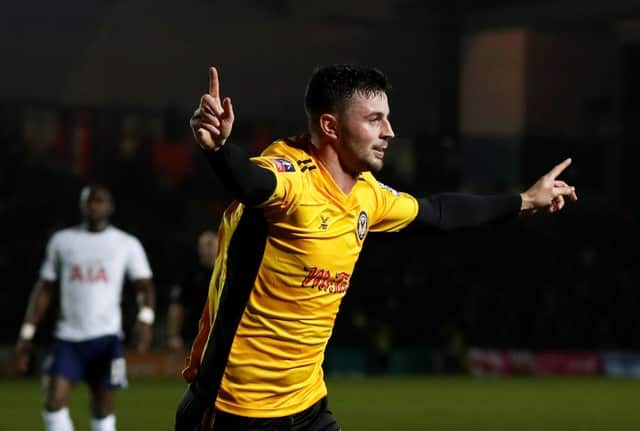 Newport County's Padraig Amond give his team the lead

Harry Kane has scored far better goals among the 30 he has netted this season – but none of them had the critical feel of the tap-in at little Newport County on Saturday that may yet transform Tottenham Hotspur’s season.

For not only did Kane’s 82nd-minute gimme spare Spurs from potential FA Cup humiliation in their fourth-round tie at the League Two club, the resulting 1-1 draw also salvaged their best chance of winning silverware in a crucial campaign.

Mauricio Pochettino’s stylish side continue to be much admired but the lack of Spurs silverware – their last trophy was the 2008 League Cup – as they prepare to move into their gleaming new London home next season is increasingly glaring.

Being on the wrong end of a Cup sensation may only have cranked up the pressure on the Argentine, which is why he was once again indebted to his alpha striker for converting Son Heung-min’s brilliant flick with embarrassment looming.

Pochettino’s strong-looking selection had suffered such a dismal, lethargic off-day against a side 72 places below them on the league ladder that the manager was forced to admit he was “a little bit relieved…well, a lot” by Kane’s late saver.

He sounded most alarmed about why his side had performed so poorly, even if the Rodney Parade experience – battling to avoid defeat in a tight stadium on a pitch shared by two rugby teams – really did look like a culture shock to some.

“The team didn’t really show they want to go next stage of the FA Cup. That is what has disappointed us,” Pochettino said after Padraig Amond’s first-half header had given Newport the scent of a genuine sensation against the eight-times Cup winners.

“The theory is to win trophies, and it’s easy to talk about that. But I think we missed a massive opportunity to show we really want to win a trophy.

“I’ve heard in my years here that the FA Cup between a Premier League team and a League Two team is magic. But if I’m honest, I didn’t see much difference.”

For Pochettino recognised this had really been Newport’s day. Their reward for such a striking effort? The chance for the 10,000 who crammed into Rodney Parade to now move on to the grandeur of Wembley’s 90,000-seater arena for the replay.

“Wembley is something else for the club to look forward to. We were nearly there, we could taste it but we switched off for a minute,” said Newport’s proud but frustrated manager, Mike Flynn. “I’m gutted because we conceded so late.”

English football’s embrace of VAR technology prompted the most contentious response yet after coming under fire from West Bromwich Albion manager Alan Pardew following his side’s FA Cup victory at Liverpool on Saturday.

The new video assistant referee system came of age in a dramatic fourth-round tie at Anfield, with the on-field review system used for the first time in England and the replay evidence widely perceived to have provided correct decisions.

Yet despite his side’s 3-2 victory to make them the first visiting team to win at Liverpool this season, Pardew was left dismayed by more than just how VAR made two key rulings against his side.

He was not the only observer to be unimpressed by the “strange” atmosphere created in the stadium as the crowd, without a big screen to see for themselves, were left in the dark about the replays viewers could watch over and over on TV.

Pardew also suggested the length of the reviews resulted in one Albion player suffering an injury as they hung around in the cold waiting for a ruling.

Referee Craig Pawson chalked off an Albion goal for offside, awarded Liverpool a penalty and checked VAR before awarding the Baggies’ crucial third, a Joel Matip own goal, as the video referrals dominated theatrically in the first half.

Craig Dawson had seemingly headed Albion 3-1 ahead from a corner but VAR showed clearly that team mate Gareth Barry was interfering in play in an offside position.

Amid a four-minute stoppage, Pawson used his pitchside monitor – the first time the on-field review has occurred in the English game – to change his mind and award a penalty to Liverpool after a foul by Jake Livermore on Mohamed Salah.

The fact that Roberto Firmino missed the resulting kick and that Albion went on to win thanks to Jay Rodriguez’s early double and the Matip own goal did not appease Pardew.

“From the sideline, it was strange. It wasn’t what I’d like to see going forward,” Pardew told BT Sport.

“We were struggling at the end because we ran out of bodies and the VAR system was a problem because I think we got a player with a hamstring injury because they were standing around for too long.

On the goal ruled out for offside, he added: “I found it hard to believe from a corner. Is it (VAR) going to start taking away goals?”

Liverpool manager Juergen Klopp was less bothered about VAR and more concerned with how familiar defensive deficiencies had cost his team their best chance of domestic silverware this season.

“Big mistakes let them back in the game,” he said, noting how Firmino’s fifth-minute goal was quickly wiped out by Rodriguez’s double.

“It’s obvious what we did wrong in these situations. The second goal was just, wow, really bad defending from the whole group.”

Voters going to the polls after ‘shallow’ campaign