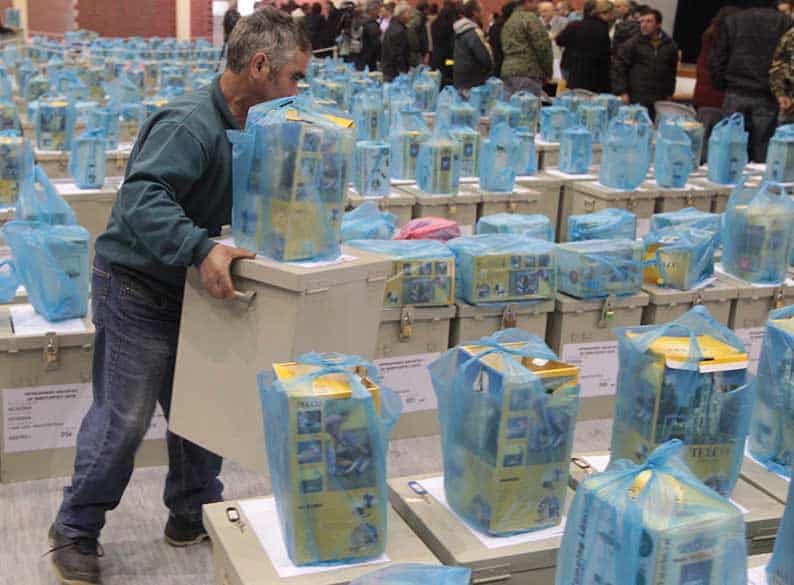 Ballot boxes being prepared on Friday. Polls open at 7.00am

By most accounts the lead up to Sunday’s presidential elections has seen the most detached election campaign in living memory.

The reasons are many, but may be distilled into one sentence: quite simply, the stakes were not that high. And although the Sunday Mail is loath to forecast the outcome of the election, it’s fair to say that this state of affairs tends to favour whoever is the incumbent.

“There’s been a disjointed, generic even, coverage of issues,” says Yiannos Katsourides, adjunct lecturer at the Department of Social and Political Sciences of the University of Cyprus (UCY) and director of the Prometheus Research Institute.

“Mostly it’s been about the candidates challenging one another on who is the most fit to govern, who is the more reliable, who is more credible – did you keep your promises and so on. And while there were proposals made by the camps, the discourse usually slipped into personal attacks.”

Katsourides has aptly dubbed the 2017-2018 election campaign a “Hobbesian ‘war of all against all’.” In a blog he writes:

“This is particularly true for the three main candidates, Anastasiades, Papadopoulos and Malas. Accusations are exchanged constantly and on a daily basis between them, as well as between their supporting parties on all issues. For example, [Giorgos] Lillikas indirectly accused [Nicholas] Papadopoulos of offering him money and public office to withdraw his candidacy and support him.”

Looking ahead, Katsourides predicts that “This polarisation between the candidates, in turn, questions their ability to form alliances at the second round and arguably places the strongest candidate (N. Anastasiades) in an advantageous position since the bridges between Papadopoulos and Malas and the parties supporting them seem broken.”

The main ‘issue’ of this campaign has been the economy, with the Cyprus problem demoted to lower rungs. But here again, none of the nine candidates have offered a comprehensive economic model that they envision, with the discourse confined to minor tweaks – be it pledges to support research and development or business startups.

Kasourides points out that major issues – such as Cyprus’ role in the European Union, or its participation in Pesco (Permanent Structured Cooperation) did not even get a mention.

“It’s taken for granted, for example, that Cyprus being all-in in the EU is the way to go, which is a little surprising when you recall that European institutions played a part in the 2013 meltdown. And as far as Pesco goes, it seems to be a niche topic, with the opposition parties realising that it’s too complicated to explain to voters, who are mostly concerned with job security and the price of milk.

“There appears to be a sense that the worst of the economic crisis is behind us, that after the shock of 2013 things are beginning to stabilise. And in the minds of many people, the thought then occurs: do we really want to experiment now and change things?”

Once more, Katsourides tells the Mail, this plays into the hands of the incumbent.

Antonis Ellinas, associate professor of political science at UCY, thinks that in these elections many will be voting for whom they consider to be the lesser evil.

Polls have consistently reflected this sentiment, as there is little to choose between the candidates in terms of real issues.

Matters are not helped by the fact the debate has been rather shallow. For instance, some of the candidates are promising to expand welfare spending, but their proposals lack any cost analysis whatsoever.

“No spending figures are cited. There’s just an assumption that the government will keep generating fiscal surpluses to pay for these expenditures,” says Ellinas.

With Anastasiades widely expected to make it to the second round, many will be glued to their TV sets today as they await to see who will be joining him in the runoff ballot.

But if recent history is anything to go by, there’s no such thing as a sure thing. The best example being the 2016 US presidential elections, where a combination of flawed opinion polls and complacency among the Democrats led to the election of Donald Trump.

We’ve had examples closer to home, too. A case in point are the 1993 elections when everyone predicted George Vassiliou would win in the runoff, but Glafcos Clerides just scraped through.

Katsourides does not rule out an upset – Anastasiades not being re-elected – but thinks it will take a confluence of variables to make that happen.

Certainly, the chances of a surprise result increase should an alliance be struck between Anastasiades’ second-round opponent and the camp that misses the runoff ticket.

“If the Malas and Papadopoulos camps make a deal, true, it will hard to sell it to their respective supporters, given all the bad blood during the campaign. There’s no telling how people will respond. However, usually the thinking is: Let’s vote for Papadopoulos (or Malas, as the case may be), because that way our party will at least have some influence on the next administration.”

Absent a pact between the Malas-Papadopoulos teams, Anastasiades’ chances of winning rise exponentially.

Then there is the not-insignificant matter of voter turnout. Five years ago, the abstention rate in the second round came to 18.42 per cent, surpassing that in the first round (16.86 per cent). And the indications this time are that voter turnout could be the lowest on record for presidential elections.

In total, there are 550,876 registered voters for these elections. Polling stations open at 7am, closing for a one-hour break at noon. Voting resumes at 1pm and polling stations will close at 6pm.

The first returns should start coming out around 6.30pm, according to Deputy Chief Returning Officer Demetris Demetriou.

The final result is expected a little after 8pm. Back in 2013, about 97 per cent of the ballots had been counted by 8pm.

Kane rescues Spurs at Newport, West Brom dump Liverpool out of the cup