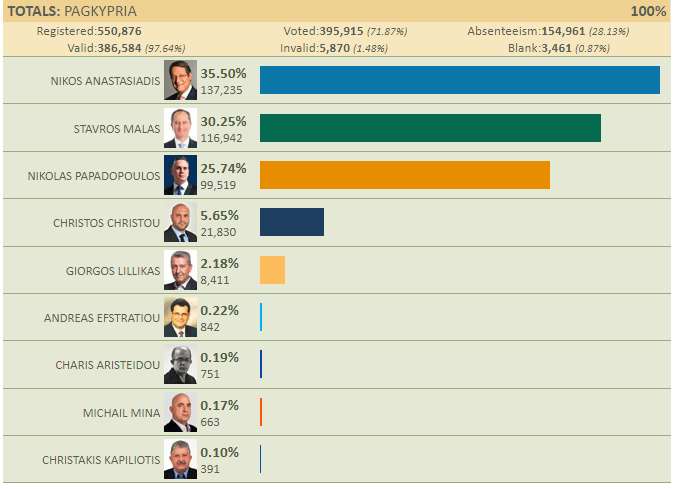 By Jean Christou and Andria Kades

Incumbent President Nicos Anastasiades on Sunday comfortably made it through to the second round of the presidential elections slated for February 4, garnering 35.5 per cent of the vote amid an election marred by voter abstention of 28.6 per cent.

He will be running against Akel-backed independent Stavros Malas who received 30.25 per cent. The results mean that the third main contender, Diko leader Nicolas Papadopoulos with 25.75     per cent is out of the running, which will be a relief for pro-solution Cypriots on both sides of the divide.

Judging by tweets from the north after the final results were known, Turkish Cypriots viewed the development as a vote by Greek Cypriots in favour of a bizonal bicommunal federation.

Though he had an early lead over Malas, the tide turned quickly for Papadopoulos in Pancyprian results, though the Diko leader won overwhelmingly in Paphos with 37.9 per cent of the vote compared with 27.1 per cent for Anastasiades and 24.01 per cent for Malas in the coastal town.

After slamming both the Anastasiades and Malas camps during the run-up to elections, Prokopiou said she would let Papadopoulos announce if and who Diko would support in the second round.

Chryssis Pantelides, a Papadopoulos senior staffer later tweeted: “I thank the citizens that support Nicolas Papadopoulos. I thank the hundreds of volunteers and party staffers for the long and hard pre-election activity. The decision of the people is completely respected. I hope they never regret it.”

At Akel headquarters in Nicosia, the party’s general-secretary Andros Kyprianou thanked “tens of thousands” of Akel voters and everyone else that voted for Malas.  “Today’s votes paved the way for a brighter future,” in the form of Malas who can bring about a solution to the Cyprus problem and an improved economy with the average person and middle class in mind, he said. “Cyprus can change direction and move forward [with Malas),” who will clamp down on corruption.

A total of 71.4 per cent of voters cast their ballot on Sunday. During the last presidential race in 2013, voter turnout was 83.14, which was considered low at the time. Parliamentary elections in 2016 only had a voter turnout of 66.74 per cent as Cypriots appear to be less interested in politics as each election comes round.  Turnout in Nicosia was 72 per cent, Limassol 69 per cent, Famagusta and Larnaca both 71 per cent, Paphos 74 per cent and Overseas 71 per cent.

The two leading candidates to emerge from Sunday’s election will have to seek support from the seven other candidates but in reality, this means the two with a significant voter base, Citizens’ Alliance leader Giorgos Lillikas and far-right Elam who garnered 2.17 per cent and 5.6 per cent respectively. The other four independents took less than 1 per cent of the vote between them.

Earlier polls have shown that in a run-off, Anastasiades would win against either Papadopoulos or Malas. The real battle on Sunday was always going to for the second-place contender but even exit polls had given Malas the edge before the official count even began.

Initial official results on Sunday showed Malas and Papadopoulos neck and neck with just over 20 per cent of the votes counted but the former pulled ahead quickly and maintained the 5 per cent lead over Papadopoulos that was forecast in the exit polls. Diko’s Pantelides had at the time told Cybc, it’s exit poll would be proved wrong.

Noteworthy was the fact that Elam’s Christos Christou took twice the votes of Lillikas who is likely hoping to trade his votes with one of the two contenders on February 4, for a ministerial position.  Malas has already stated categorically that he would not be seeking the support of Elam between the first and second rounds. He is the only candidate to pledge this.

An Elam spokesman, after the exit polls, thanked those who voted for Christou. “Abstention has been the real victor in the elections and that should concern all candidates. The fault lies with those that have governed and those that supported them,” the spokesman said.

While it was known from earlier polling that Anastasiades would have a comfortable lead, the real battle was whether he would go through to the second round against Malas or Papadopoulos.

According to polls, in an Anastasiades-Malas showdown, the incumbent would take 39.9 per cent against his opponent’s 26.6 per cent.

Deputy spokesman Victoras Papadopoulos  said: “Anastasiades is the change people need. After five difficult years we have reached a point where development, safety and security are visible as opposed to the five years in 2008 and 2013. The ‘next day’ dilemma is unity. We believe, President Nicos Anastasiades has proven he can achieve unity in the sector of modernising the state and Cyprus problem.”

Akel spokesman Stefanos Stefanou  said irrespective of the results, voters wanted change. “Greek Cypriots and Turkish Cypriots should be the true ‘afendies’ (leaders) of the country,” he said.

Exit polls: Anastasiades going through, battle between Malas and Papadopoulos

Photos from presidential elections, round 1 (Updated)