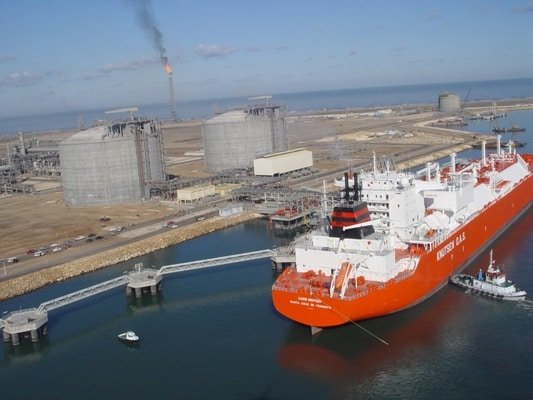 One of Egypt's LNG plants at Damietta

The greatest problem making exports of East Med gas, especially from Cyprus and Israel, challenging and difficult, is not political risk, but commercial due to the low global gas prices. You experience political risk when you reach the point of selling. If the prospect of selling is not there, where is the risk?

Exploring and discovering the gas has not been stopped due to political risk. But despite strong EU support, neither Cyprus nor Israel are anywhere near selling their gas to Europe. They cannot find buyers.

The key limiting factor is price. East Med gas cannot match average gas prices in Europe in the range $5-$6/mmBTU. By the time gas reaches Europe, whichever way it is exported – as liquefied natural gas (LNG) or through pipelines – the asking price would be well above this range. Even politically desirable US LNG, at prices just above the EU market range, is struggling to make inroads into Europe.

Egyptian gas is another matter. A number of new gas-fields are coming into operation boosting production – not just Zohr, but also West Nile Delta, Atoll and Nooros, with more to come. These will not only satisfy domestic demand but by next year there will also be surplus gas for export, eventually fully utilising Egypt’s two existing liquefaction terminals.

Cyprus and Israel still need to find ways to produce and sell their gas at European gas market prices. And there lies the main challenge.

Let’s take Israel. Noble Energy discovered Leviathan in 2010 and has so far spent hundreds of millions of dollars in exploration and drilling, which it needs to recover. It has three possible export routes:

None of these is commercially viable. With Noble expecting about $4.50/mmBTU at the platform, adding the cost of pipelines, liquefaction and transport to Europe would always take the price above the European market range. Noble cannot reduce the price at the platform. If it does it will have to offer such a lower price to its customers in Israel. Given Noble’s investment so far, do you really believe that if there were a commercially viable export option it would sit and wait? Like any other commercial company, its priority would be to expedite sales, recover its costs and produce returns for its shareholders. This has not been possible primarily due to commercial factors.

The politics of whether Israel can take its gas to Egypt or not would come into play if the venture were commercially viable – it is not. As a result, there is no urgency to resolve political problems.

Similarly, exports to Turkey are not commercially viable. Starting at $4.50/mmBTU at the platform, by the time the gas reaches Turkey the price would be higher than the average price of Russian gas. In addition, Turkey’s own policies are to maximise indigenous energy production and limit gas import dependency. It has also diversified its gas sources, with the Trans-Anatolian gas pipeline and more LNG through floating storage regasification units. So there is no strategic reason to buy more expensive Israeli gas. As a result, there is no urgency to confront the thorny issue of such a pipeline passing through Cyprus’ EEZ without Cyprus’ permission.

The purpose of the EastMed gas pipeline is to carry Leviathan and Aphrodite gas to Europe. This would require close Israel/Cyprus cooperation. If so, why hasn’t the unitisation agreement between Cyprus and Israel been sorted out after six years of negotiations? This has also left ownership of Aphrodite unresolved. The reservoir straddles the Cyprus-Israel EEZ boundary. Without agreeing who owns what part of Aphrodite it is not possible to progress development plans. But the urgency to confront these issues is not there because the EastMed pipeline is not a commercially viable pipeline – it is a pipe-dream!

Similar problems apply to Cyprus and export of Aphrodite gas. The primary challenge is still commercial viability. That’s why so far Noble’s efforts to secure gas sales have not succeeded, including through the Egyptian route despite the political good-will.

In the meanwhile, despite harassment and intimidation by Turkey, drilling carries on in Cyprus. The gas companies are aware of these risks and are continuing with their drilling plans, regardless of what Turkey does, unless of course, it affects the safety of their personnel. But the likelihood that this aggression, witnessed every time Cyprus drills in its EEZ, will cause a hot incident is low.

Turkey’s threats have not changed anything so far. Despite tension, the gas companies believe that the political risk is manageable. Apart from EU support, they also have the support of their governments – the US, France and Italy.

In the meanwhile, with Zohr and other gas-fields starting production, Egypt is well on the way to self-sufficiency and to a complete energy transformation. Egypt expects to become self-sufficient in gas by the end of 2018, allowing it to phase out LNG imports, and resume LNG exports in 2019. This is good news for the country but could be bad news for Israel and Cyprus that still nurture hopes to export gas to Egypt.

Egypt’s two LNG plants came on stream in 2004 and 2005 with a combined capacity of 17.5 bcm/yr – surplus gas after 2020 will make full use of this capacity. The tolling fee is low and most of the LNG will be exported to Europe through existing contracts.

Egypt’s petroleum minister is on record stating that if surplus gas supplies keep on increasing, Egypt may consider adding a third LNG-exporting terminal. This could also accommodate gas from Cyprus and possibly Israel. The minister confirmed to the Financial Times that Egypt is ready to receive such gas, liquefy it and export it to the international markets. However, for a new LNG plant the tolling fee would treble, making such exports commercially challenging.

Thus, the conclusions from what I have presented are:

With Cyprus and Israel facing commercial challenges exporting their gas and with Egypt being transformed, buoyed by new discoveries, the foundation for stronger economic integration between states in the region is lacking, even if political cooperation, excluding Turkey, has never been so promising.

Reaching a delicate compromise over Macedonia