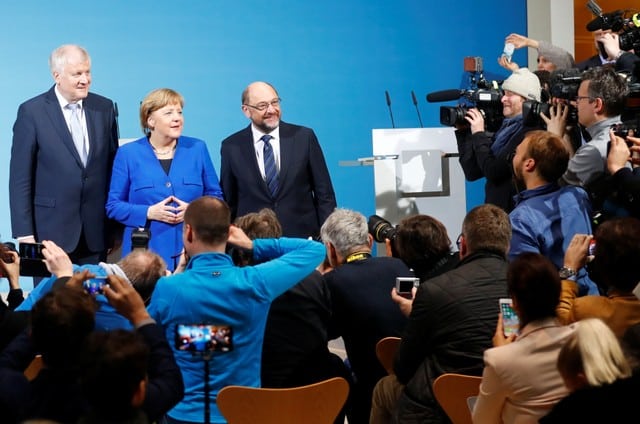 The leader of Germany‘s Social Democrats (SPD) played down hopes on Monday for swift progress in coalition talks with Chancellor Angela Merkel’s conservatives, an SPD source said, amid continued disagreement over several issues including refugees.

Four months after both Merkel’s party and the SPD performed worse than expected in a federal election, they are trying to iron out policy differences and form a ‘grand coalition’ like the one that led Germany from 2013 to 2017.

Merkel, who failed to form a government in talks with two smaller parties late last year, needs the talks with the SPD to succeed in order to secure a fourth term as chancellor.

In meetings with his party leadership on Monday, SPD leader Martin Schulz expressed scepticism about the first round of coalition talks with the conservatives and highlighted the main controversial issues, the SPD source said.

Those include family reunions for refugees allowed to stay in Germany, health insurance and employment policy.

Schulz said it was unclear what kind of compromises or agreements could be made in those areas, the source said.

The family reunion issue is particularly sensitive after the previous Merkel-led ‘grand coalition’ agreed in 2015 to take in more than one million migrants and refugees, many fleeing conflicts in the Middle East.

The SPD favours a more lenient approach towards those refugees seeking to bring to Germanyfamily members whom they left behind in places like Syria and Iraq.

But the conservatives are keen to present a tougher line on immigration to avoid losing more votes to the far-right Alternative for Germany (AfD), which surged into parliament for the first time after last September’s election.

Although the talks on family reunions broke off overnight without agreement, SPD deputy leader Malu Dreyer had earlier sounded a more optimistic note than Schulz, saying the parties were in the “final stages” of clinching an accord on this issue.

Dreyer told Deutschlandfunk radio there was a will among the negotiators “that we really reach an agreement today”.

Representatives of the SPD and conservatives told Reuters that suggestions to include a pledge in the coalition deal to introduce a levy on petrol, gas and heating oil had met with strong resistance during talks on Sunday.

The idea had been to use the extra revenues to reduce the cost of electricity or promote environmentally-friendly fuels but the Christian Social Union (CSU) – the Bavarian sister party of Merkel’s conservatives – was especially concerned that higher prices for heating oil could harm their chances in Bavaria’s regional election this year, the sources said.

They said negotiations in the working group that focuses on the environment and energy had otherwise been constructive. The group backed an extra paragraph on energy efficiency to be added to the coalition blueprint, which would also ensure that building renovations were tax-deductible.

Kim Jong Nam met US national before he was killed, police say