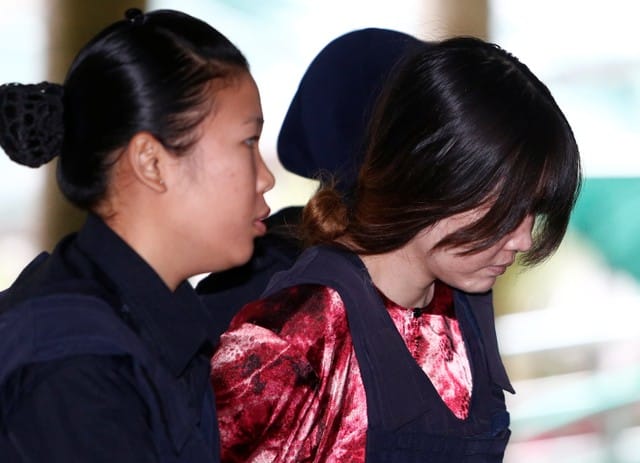 Vietnamese Doan Thi Huong, who is on trial for the killing of Kim Jong Nam, the estranged half-brother of North Korea's leader, is escorted as she arrives at the Shah Alam High Court on the outskirts of Kuala Lumpur, Malaysia

Two women, Indonesian Siti Aisyah and Doan Thi Huong, a Vietnamese, have been charged with four North Korean fugitives for the murder. Prosecutors say the women smeared his face with VX, a lethal chemical poison at Kuala Lumpur airport on Feb 13.

Defence lawyers say the women thought they were playing a prank for a reality show. They face the death penalty, if convicted.

But he was unable to confirm numerous details, saying he could not recall the name of the hotel where Kim stayed and did not know the name of the American man seen meeting with the North Korean on Feb. 9.

“Until today, the identity of the person being referred to could not be obtained,” he said.

Siti Aisyah’s lawyer, Gooi Soon Seng, had questioned Wan Azirul on a May 2017 report in the Japanese daily, Asahi Shimbun, that Kim had met a US intelligence agent in Langkawi.

The report said Kim was believed to have passed a large amount of data to the agent, citing aMalaysian forensics analysis of a laptop found in Kim’s backpack after his death.

Wan Azirul confirmed the laptop was sent to a forensics laboratory in the Malaysian capital of Kuala Lumpur, which found the computer had last been used on Feb 9.

The forensics report, provided to reporters at the hearing, also showed some data had been accessed from a USB pendrive inserted into the laptop on the same day.

But Wan Azirul said he was unsure whether Kim had passed on data in Langkawi or if the meeting was linked to the airport murder.

Gooi accused the police witness of being evasive.

“Come on, you have a total lapse in memory?” he told Wan Azirul. “You say you investigated but you’ve forgotten everything? Which hotel? What was this investigation for, if it wasn’t related to this case?” The trial resumes on Tuesday.

Buffon undecided if he will retire this season