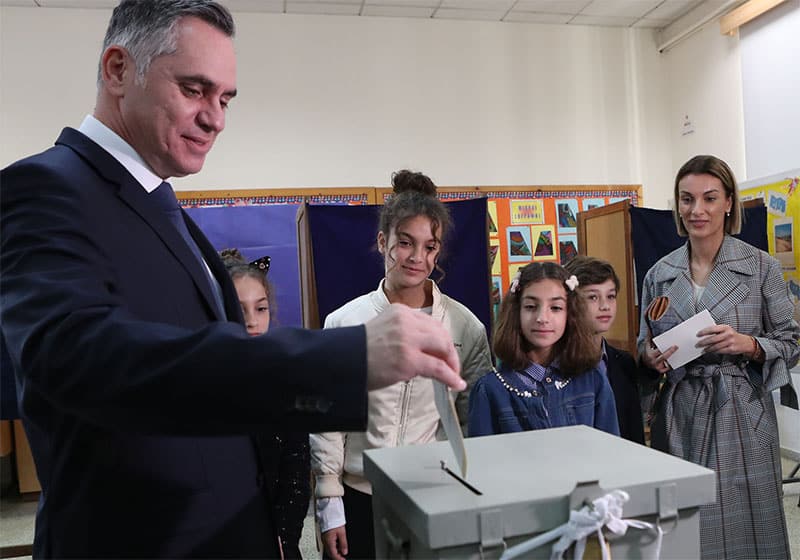 Diko leader Nicolas Papadopoulos voting in the first round

Diko will not support either candidate in Sunday’s presidential runoff, party spokesman Athos Antoniades said on Tuesday after a meeting of the party’s executive board.

Asked if the party’s stance was calling on their supporters to pick whoever they wish, the Diko spokesperson said “Voters, who think they can support one of the two candidates, should do it.”

He added that the party would not call on their supporters to cast a blank ballot, to abstain, or support either of the two.

“In contrast with the vast majority, there were – unfortunately – a number of members that violated the decision of the Democratic Party and worked against the candidacy of the party chairman, by supporting other candidates,” Antoniades said.

Another 17 party members are also set to appear in front of the disciplinary council.

Pending a final decision, Diko is suspending the five cadres’ participation in the party’s collective organs.
Following Sunday’s result, which saw Diko candidate Nicolas Papadopoulos miss the ticket for the runoff ballot, there have been growing calls inside the party for a purge.

Deputy chairman Marcos Kyprianou told Politis radio that certain members had placed themselves outside the party and it would be better if they left on their own.

“There is an outcry from the people because members… worked for a different candidate,” he said.

During the election campaign, a number of Diko cadres openly held gatherings stating their opposition to Papadopoulos’ perceived hard-line positions on the Cyprus issue.

Such gatherings were even held in Limassol and Nicosia on January 24 – just four days prior to the first round of the election.

Back in October, several officials had broken ranks including the party vice chairman Christos Patsalides.

And in December, Garoyian fired a shot at Papadopoulos, who unseated him as Diko leader in 2013, disagreeing with voicing Papadopoulos’ veiled efforts to denounce the bizonal, bicommunal federation as the model for a solution to the Cyprus problem.

Under Garoyian, Diko forged collaborations with Akel, winning the 2008 election and participating in the Demetris Christofias administration, which it left following the 2011 Mari disaster, and then with Disy, propelling then-leader Nicos Anastasiades to the presidency.

Now, the move to cast out the apostates may serve another purpose beyond retribution: it is speculated that Papadopoulos is seeking to solidify his influence within a fractured party and pre-empt a possible power play by Garoyian and company who may be smelling blood after Papadopoulos’ defeat in these presidential elections.

Sources close to a party, who wished to remain anonymous, told the Cyprus Mail that the word on the grapevine is that the Diko dissidents may this week be openly announcing their support to the incumbent president Nicos Anastasiades.