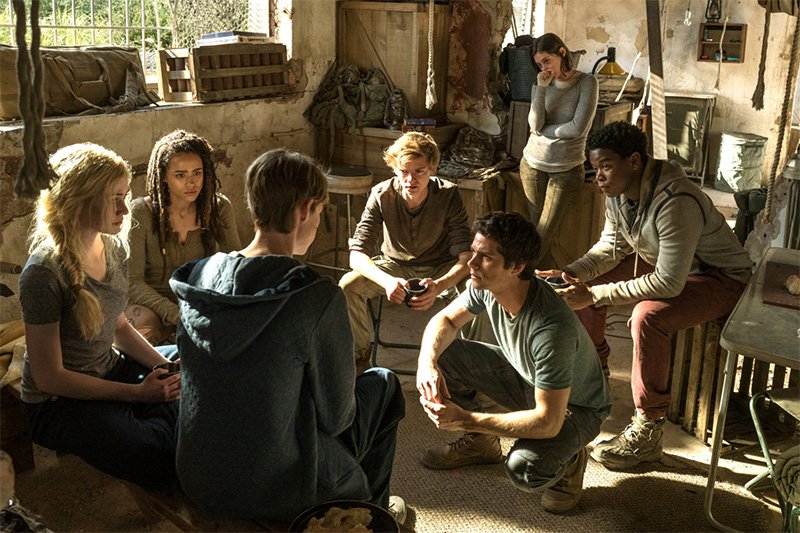 As the third and final installment in this young adult film franchise, Maze Runner: The Death Cure draws its last breath (one hopes). Like its two pretty mediocre predecessors, it continues in the same pulseless narrative vein, yet as it is the last one might have hoped for some kind of memorable send off.

Is it watchable? Sure. It doesn’t make you want to bury your head in your popcorn. But with little else to do than complete the series, you might find yourself flipping through your phone wondering why you keep losing track of the film’s story. Answer: because despite the watchable action, there really isn’t much of a story.

Is it that bad? No, not THAT bad, just completely average. The producers probably realised they wouldn’t get a new following this late in the saga’s life and therefore carried on as they’d begun. Plus, production wasn’t without serious disruptions either; they were forced to halt filming for a year as Dylan O’Brien (Thomas) received a dangerous head injury during one of the stunt scenes. Apparently all’s ok now.

So back in dystopia again, the escaped Glader kids (who are played by 20 and 30 something year olds) are on a life risking mission to save their friends. Particularly Minho (Ki Hong Lee), a resilient fellow who along with other ‘immunes’ has been captured by the wicked WCKD (Catastrophe: Killzone Experiment Department) conducting gruesome experiments on them hoping to find a cure for the global pandemic ‘The Flare’. These lab rat kids have a miraculous immunity to the virus which has turned the world’s population into zombie like freaks called Cranks and so, in the name of science, WCKD (which hides away in the shiny towers of society’s Last City,) performs ethically questionable procedures to discover a cure. Consequently, ex lab rat, love interest and current scientist Teresa (Kaya Scodelario) who turned to the ‘dark side’ believing it was for a good cause, insists that the cure is nigh. What’s a bit of betrayal, heartbreak and heinous medical torture between old buddies if it’s for a good cause?

Anyway, with civilisation in tatters and cranks trying to kill the living (considering there’s three infected people to every one healthy human in their world, it’s surprising how little air time these veiny fiends get) the long suffering heroes must break into the WCKD controlled urban labyrinth, save their friends and find answers which they’ve been halfheartedly searching for since they first arrived in the maze.

Then followed by action, nothing, action, tumbleweed, action; the end. For all of its 142-long-minute running time, this action sci-fi thriller could have come up with a richer, compelling and plot twisting narrative. The film is at its best when it’s blowing something up or dropping something out of the sky (Wes Ball, director of all three pictures should be proud of this aspect) but it’s everything in between that leaves one frustrated. With poor storytelling, woeful character development and zero entertaining dialogue, it’s hard to sit back and just enjoy the action. To add insult to injury, the only parts that stood out (and for the wrong reasons) were when Thomas flipped a finger at baddy Janson (Aidan Gillen) after surviving a jump from a tall tower and the sparkly bus flashing its ‘out of service’ lights when it died; where did these unexpected attempts at humour come from in this otherwise humourless film?

Plus, the methodology of every sect is disconcerting. What does each group want? It’s all pretty vague, as are most characters’ motives. Why has Gally (Will Poulter) turned good? His reasons are unconvincing. Plus what’s the purpose of Walton Goggins’ scary character and the resistance he leads, both of which seem underused and a waste of screen time if it’s just to knock down a wall. If there’s more to that storyline which was cut out in editing it would have been useful to know. It’s sad really because the film has some great actors in it. It would have been nice to see the likes of Brenda (Rosa Salazar) and Newt (Thomas Brodie Sangster) chomping into some juicy character lines.

Despite the great action and skilled actors, the lack of a script let down the last of an already forgettable trilogy. So if you’re a big fan of the book series, you’ll probably be half satisfied with this adequate but overlong finale, else expect basic entertainment which will be forgotten once you leave your seat.