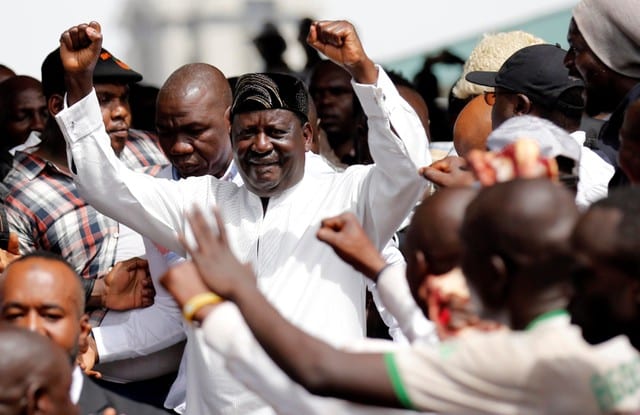 Kenyan authorities shut television and radio stations on Tuesday as supporters of opposition leader Raila Odinga watched him take a symbolic presidential oath on the Bible in a Nairobi park in a direct challenge to President Uhuru Kenyatta.

Odinga’s supporters say he is Kenya’s legitimate leader and Kenyatta’s election was neither free nor fair.

Kenyatta’s victory in August was annulled by the supreme court over irregularities but he then won a re-run, which Odinga boycotted over a failure to revamp the electoral commission.

Kenyatta was sworn in for a second term in November and state institutions report to him.

“I, Raila Omolo Odinga, do swear that I will protect the nation as people’s president, so help me God,” Odinga said to the cheers of more than 15,000 people in Uhuru Park, next to Nairobi’s main business district.

During a speech lasting less than five minutes, Odinga declined to give details of his plans and said they would be disclosed in “due course”. In a possible sign of division within the opposition alliance, Odinga’s vice presidential candidate and two other senior leaders were absent.

Odinga said the vice president would be sworn in at a later date.

The attorney-general had warned that Odinga could be charged with treason if the event went ahead – an offence that can carry the death penalty.

As people assembled, authorities forced independent television and radio stations reporting on the gathering off air, several outlets said – the most widespread censorship for a decade.

“We have an illegitimate government which is pretending to be in power,” Odinga told a local broadcaster by phone in an interview that was streamed online before the event. “Whenever there is a crisis, there is also an opportunity. This is an opportunity to bring the country together.”

Odinga refused to be drawn on his plans for after his symbolic inauguration, repeatedly telling the interviewer, “Hold your horses” and “We’ll see”.

Many of the protesters were chanting pro-Odinga slogans, waving tree branches and blowing horns and whistles. But afterwards several said they could not hear what was said during Odinga’s brief address.

“I’m happy this has happened but we are waiting for the next step forward but we don’t know what it is,” said nurse Grace Waithera. “I’m very fed up with this … government. If we can remove them we will.”

Many of those at the rally had come from the capital’s slums. Odinga has strong support there and in the west and along the coast, areas where people have long felt ignored by central government and shut out of political patronage networks.