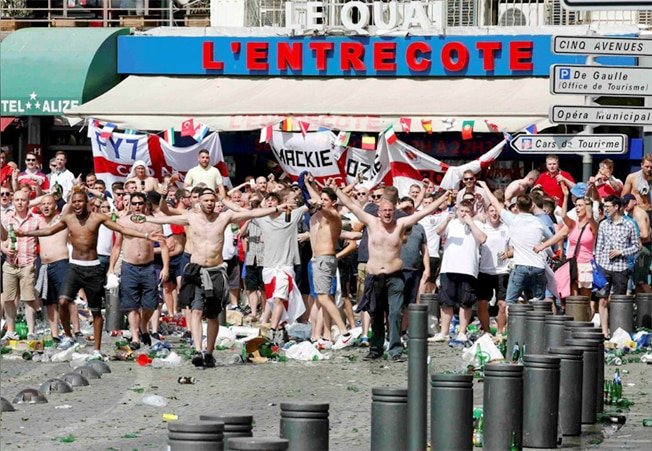 England and Russia were threatened with expulsion from the 2016 European Championship in France after brawls between Russian and English hooligans that both countries blamed on each other’s fans.

Russian and British police have been cooperating to avoid a repeat this summer, Deputy Chief Constable Mark Roberts said, with Russian authorities visiting England to watch its soccer policing in action and British officials going to Russia to discuss tactics and strategies.

Roberts said he was confident the Russians were on top of security at the tournament, which will be held in 12 venues in 11 cities, including Moscow, St Petersburg, Sochi and Kazan.

“Gauging everything the Russian police have said, everything I’ve seen, there’s a high degree of commitment to deal with their own risk supporters as well as any visiting ones,” Roberts said in an interview at police headquarters in Sheffield, northern England, where he is based.

“My sense is the hooligans in Russia will be wary of the Russian authorities.”

English fans have had a reputation for hooliganism since the 1970s and caused trouble in the 1998 World Cup in France and the European Championships in Belgium in 2000.

Britain has had success cracking down on the problem by banning travel for known troublemakers – nearly 2,000 people are currently banned – and giving police the power to confiscate their passports.

Not one British national was arrested for football-related disorder at tournaments in South Africa in 2010, Poland and Ukraine in 2012 or Brazil in 2014.

The trouble in Marseilles two years ago reignited concerns that English football violence could return, however.

“I think they (the Russians) are wary as every host nation is,” Roberts said.

While an estimated half a million British fans travelled to France in 2016 only about 10,000-20,000 fans were expected to make the trip to Russia, however, he said.

English fans should not misbehave in Russia and should expect serious consequences if they do, he said.

“There is a tendency when English supporters travel abroad to try to push the buttons of the local people. My perception is that sort of attempt to press the buttons in Russia would be really dimly viewed,” Roberts said.

“If people were to get drunk and behave in a way that was perceived locally as being disrespectful to the hosts, that could provoke an adverse reaction. I really would make the point to supporters travelling that there will be a robust police response.”

CIA director expects Russia will try to target US midterms

‘Brilliant boy’ Greenwood will only get better, says Solskjaer

City honour Liverpool – then hammer them 4-0