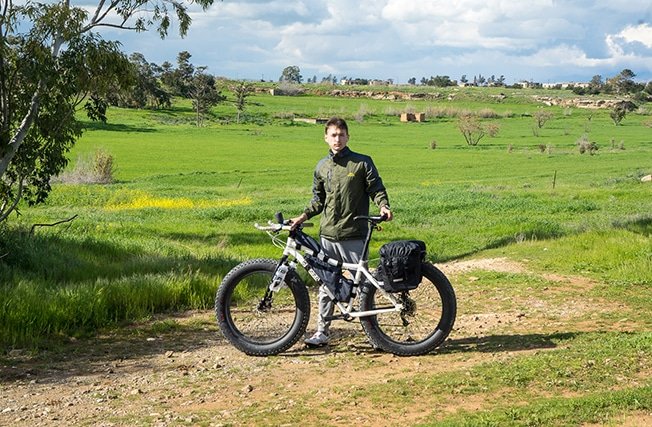 A representative of the Russian PLAN X Adventure Team Sergey Severin has completed a cycle loop across Cyprus.

It took the athlete just three-and-a-half days to cover over 600 kilometres of the way.

The cyclist started from Limassol at 6am on Friday. Riding along the island’s perimeter, he spent 53 hours in the saddle with breaks for sleeping and eating only. He crossed the Green Line twice.

“I go to Cyprus quite often so this time I wanted to show that one may come to the island not only during a warm season. Picturesque landscapes and opportunities for outdoor activities are available here throughout the whole year,” Severin said.

An intention to ride the route in record time encouraged his will-to-win spirit.

“To get the full-scale impressions and enjoy the scenery one needs to take at least one week for such a route,” he said. “But it was important for me to challenge myself. Before that, I’d never travelled 200 kilometres a day.”

The major part of the route runs along highways. Despite this he refused to use a road bike suitable for such conditions.
“I’ve made it riding a bike which is prepared for a hard off-road,” he said after finishing.

“But when you compete not with actual rivals, but with yourself, the technique takes a back seat. Perseverance and self-confidence – that’s what matters the most.”

Severin is the head of the Russian extreme PLAN X Adventure Team.

Back in 2015, using the very same bicycle, he crossed Siberia’s frozen Lake Baikal from the most northerly to the most southerly point.
That 800-kilometre ride took him 13 days.

In 2017, Severin organised an expedition named ‘Half the country under sail’.
As an inflatable sail catamaran crew member, he covered about 6000 km along the Yenisei River in Siberia and the Arctic Ocean.

Afghanistan says Taliban will have to be defeated