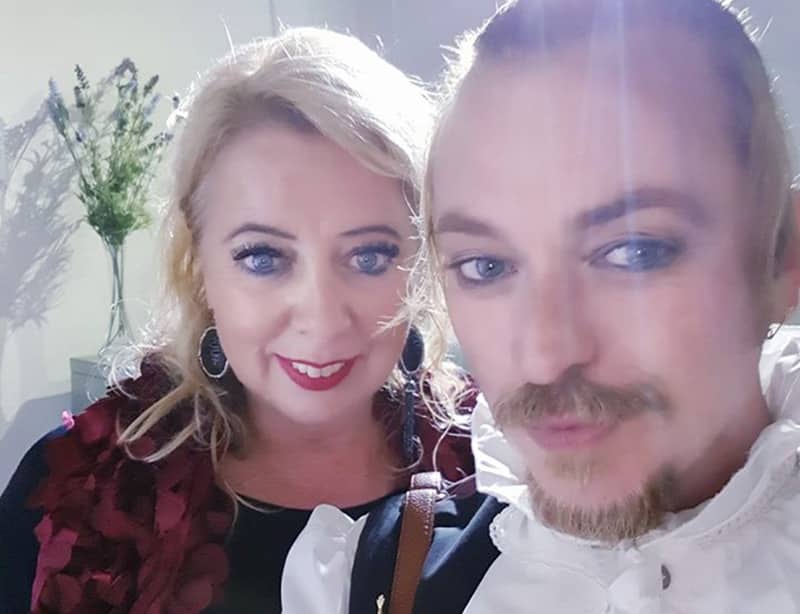 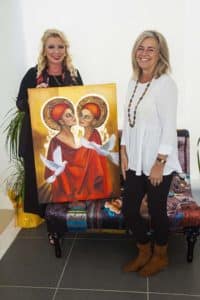 No-one can do everything but a travelling exhibition opening next month to raise funds for cancer patients shows there is always something that can be done. NAN MACKENZIE meets its organiser

Sarah Coyne is one of those enviable women who seems to have it all, a very happy long-term relationship, a thriving local business she runs with her partner, natural blonde locks, periwinkle blue eyes and a smile that can light up a room. But when we actually met the stereotypical blonde image failed to impress me as much as her enthusiasm for life and the unstinting support she gives to charities through her initiative The Space Art for Charity – over the past 18 months she has already handed over €26,000 of charitable donations to Cyprus-based registered charities.

Born and brought up with her younger brother in Chertsey, Surrey, she studied fine art at Southampton University, gained a BA Hons in History of Art and went on to study art in Italy before returning to London to work for various galleries including the prestigious Nigel Greenwood gallery before moving on to renowned London Auction house Phillips, putting to excellent use her training in art studies assisting with valuations and organising viewings etc. A spate of auctioneering was followed by starting up with her partner a hugely successful UK-wide franchise business which resulted in her becoming one of the finalists for the Nat West Business woman of the year in 2004 and an accompanying invitation to visit 10 Downing Street.

In 2005 Sarah flew from London to Paphos. Her first visit to the island was so enjoyable she decided like so many others had done before her that this would be a perfect place to relocate and build a life away from the daily pressure cooker existence in the UK capital. Never one to put things on the back burner, Sarah did her homework and at the optimum time sold her franchise business for a healthy profit, moved to Paphos, became home owners and then, as Sarah explained after setting up a new business here, her almost perfect life suddenly changed. “At the age of 36 I suffered a stroke. The doctor here in Cyprus found after multiple tests that the cause had been a hole in my heart, a condition I had been born with and had gone undiscovered, until that fateful day

“I was flown back to the UK where surgeons at the Royal Brompton hospital in London managed to close the hole. Within a few months I had physically recovered but mentally it took several years to get over the experience, and to be honest I don’t think one ever really gets over it completely. What the experience did teach me was that until you have been seriously ill you have no real understanding or empathy regarding what it is really like to go through major operations and the follow up invasive treatments patients have to endure.”

But there was more heartache to follow. “A few years later my mother was diagnosed with a rare form of Lymphoma and once again I moved from Cyprus to London to support her through her treatment at the Royal Marsden Hospital. The cancer which the oncologist thought had been caught in time proved to be more resilient to the radiotherapy and soon returned, this time however the treatment worked. My mother regardless of the strain she was under while being treated then took on the position of a governor at the Royal Marsden as she wished to ‘give back’ to the hospital. Sometimes she was so ill but would resolutely attend meetings, read reports and help implement actions that in turn would improve life for cancer patients.

“She was, and still is my inspiration for raising funds for Pasykaf (The Cyprus Association of Cancer Patients and Friends) then this year a very close friend was diagnosed here in Cyprus with liver cancer after undergoing a double mastectomy for breast cancer a few years previously, and once again my life along with hers changed dramatically. The grim experience of taking one’s friend to Limassol twice a month for chemotherapy over a four month period was at best educational and at worst harrowing. I did see first-hand the enormous toll this treatment takes out of patients and found it heart breaking to see this once vibrant woman be so reduced physically and have her spirit totally numbed by the treatment and the myriad of chronic side effects which developed over the weeks and months of treatment.”

Sarah is now the indomitable driving force behind the Space Art for Charity, which she set up to raise money to support the Pasykaf home care nurses, who through her friend again saw the “utterly and absolutely essential” work they do on a daily basis, crucial to patients’ survival and recovery. “When my friend was very ill and suffering a whole host of side effects from the chemotherapy a nurse visited every day to give injections and deliver medication to curb some of the more extreme side effects such as vomiting, fever, and severe constipation, not something people talk about but these problems added to all the other things going on in her body meant that constant monitoring was the priority. Both she and I now agree that without these daily visits and the ability for me to always be able to call the home care nurse on duty if things changed, she would not have got through those months of physical hell. I also found out that cancer is a constant cycle of tiring and often painful tests, results and treatment and that combined with the sheer metal strain of waiting days for the results of blood results or the report from the CT scan to find out if the cancer has spread to other organs or, if the chemotherapy has done its job, was described to me as an experience akin to waiting for a deathly lottery ticket to be drawn.” Again the nurse was there for support and to keep things in focus. “I readily confess to drinking a good number of glasses of red wine while we waited for each result to come back,” says Sarah.

Pasykaf is a registered island wide charity and the many services it provides are free to all cancer patients regardless of nationality, including the homecare nurses. There are 26 nurses who travel within their set region to care for people in their own homes. These are a special breed of humans as they have to deal also with end of life care and that takes a huge amount of both professionalism and empathy especially as they will have built over the years and months a level of friendship and mutual respect with their patients.

The core aim of the Space Art for Charity exhibitor is to raise much needed funds for those dedicated nurses and to keep them on the road, travelling to outlying villages helping make life so much more comfortable and ‘liveable’ and to offer the feeling of safety for patients and allow them to stay in their own homes and recover. Sarah has raised a considerable amount of money for charity and has learnt it is not an easy task, comparing it to an extreme sport. She says it often leaves her with a feeling she has been “begging” when in fact supporting a professionally-run charity can be mutually beneficial to companies. 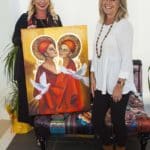 Sometimes the ones who give the most are the ones with the least to spare, “and it is a truism that one does find meaning in helping others”. The down side is the lack of support received from those who initially promise their time to help mount an event, “sadly there always seems to be a flurry of excuses when they are actually asked to do something”. Regardless, Sarah and her team keep plugging away to get sponsors and live in the hope their message will get through so sometimes they do achieve a result.

“Sometimes you don’t get your message through, but you have to always keep trying,” she says. “I always say to people that no one can do everything but everyone can do something and I do believe that it is important that charity should be the voluntary actions of the community not the government.”

The third 2018 annual Space for Art event in support of PASYKAF will launch on February 17 at the Almyra hotel in Paphos, before moving in March to the Aphrodite Amathusia Cultural centre in Limassol and the 1010 Hall in Nicosia. The wide variety of works have been donated by both local and European artists, while several have been created specifically for the exhibition Life. Artists involved range from their early 20s to late 70s, and many will be instantly recognised others while others will be new to the exhibition scene, “but the overall standard of works on show be it the sculpture, mosaics or the paintings, will reflect the fact that Cyprus offers a genuine and highly talented thriving creative community”.

The exhibition will give residents the opportunity to view the work of over 80 artists who have all donated 100 per cent of the selling price of each artwork going to Pasykaf. The three venues have also generously given their space at no cost. “We also have excellent award winning wine makers from each of the three regions who will donate freely of their quality wines on each of the opening nights, all we need now is for people to come, for them to also bring their friends and importantly for them to buy an original piece of art. Their pleasure will be twofold: they will then own a visually attractive painting and every time they look at the image they will also know they have also invested in a truly excellent charity. Pasykaf a charity dedicated to recognising and dealing with those diagnosed with cancer and who understand the fear people have when trying to survive in a body that wants to destroy you.”