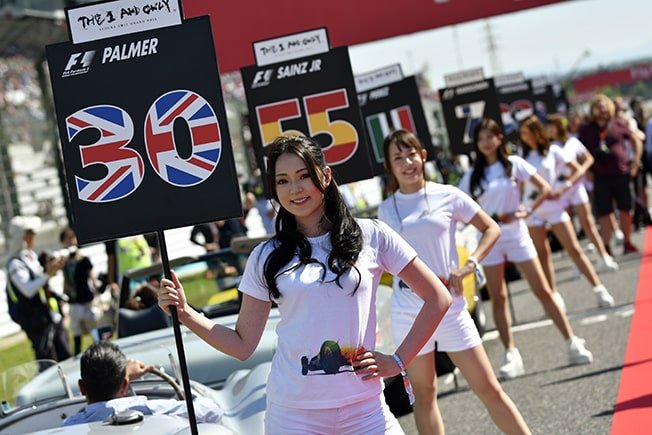 In a move which mirrors the Professional Darts Corporation’s decision to end the long-established practice of women escorting male players to the stage, F1 will no longer use grid girls from this coming season

Formula One is ending the use of female models who parade and stand with the drivers’ name boards before every grand prix, with immediate effect.

The sport announced the decision in a statement on Wednesday and said the change would also apply to all support series on the programme.

“While the practice of employing grid girls has been a staple of Formula One grands prix for decades, we feel this custom does not resonate with our brand values and clearly is at odds with modern day societal norms,” said commercial manager Sean Bratches.

“We don’t believe the practice is appropriate or relevant to Formula One and its fans, old and new, across the world,” he added.

Formula One has not had a woman race driver on the starting grid since the 1970s but is far more mixed off the track, with female engineers and mechanics as well as in media and marketing.

Two of the 10 teams have had female bosses, including former champions Williams, and Formula One management has a number of women in senior positions.

The use of female models, even if not as scantily-clad as in the past, has been increasingly criticised in a sport that is now under US-based ownership following Liberty Media’s takeover last year.

Liberty, who ousted former supremo Bernie Ecclestone a year ago, have been looking to make the pre-race show more of a feature with the emphasis on entertainment for fans and promotion.

“Formula One considers the time spent by teams and drivers on the grid before a race as one of celebration, where guests and various performers can add to the glamour and spectacle of the Grand Prix,” the statement said.

It added that the change would allow promoters and partners “to showcase their countries and products”.

Ross Brawn, Formula One’s managing director for motorsport, gave notice last December that the use of female models on the grid was under review for the season starting in Australia on March 25.

“There’s a lot of people respect the tradition of the grid girls and there’s people who feel that it has become a bit dated, so we’re addressing that,” he told the BBC at the time.

In 2015, men were deployed in place of the women at the Monaco Grand Prix – a move welcomed by some fans and deplored by others.

That same year, the FIA-sanctioned World Endurance Championship announced an end to the practice at the Le Mans 24 Hours sportscar race.