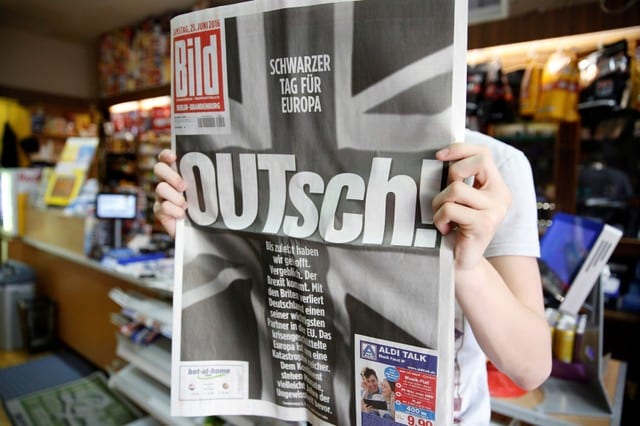 File photo: A man holds up the German newspaper Bild with the headline "OUTsch!", for the camera, in Berlin

The editor-in-chief of German red-top tabloid Bild, Europe’s best-selling newspaper, quit on Friday after losing a power struggle with the head of its digital edition.

Tanit Koch, 40, resigned after two years at the helm of publisher Axel Springer’s flagship print title. In a message to staff, she said her working relationship with digital chief Julian Reichelt broke down last year.

“In the year 2017 my readiness to compromise reached its limits,” Koch said in the email, a copy of which was seen by Reuters.

The management ructions offer a rare insight into the inner workings of Europe’s largest digital publisher, which was founded by the late Axel Springer in 1946. His widow, Friede, remains the main owner of the company.

Springer CEO Mathias Doepfner said that the double act at the top of Bild had not worked out as intended.

“We meant the division of editorial responsibilities well, but in practice it didn’t work because the setup didn’t fit with Bild,” Doepfner said in a statement, expressing regret at Koch’s departure.

Bild’s print circulation has halved to around 2 million since the turn of the millennium. Although its advertising revenues were strong in the last quarter, the drift of readers away to online news sites has been relentless.

Digital operations now account for more than 70 percent of revenues and core profits at Axel Springer, which in addition to news is focusing on its faster growing jobs and real estate classifieds businesses.

Springer announced in November it would eliminate some jobs as its restructures its German business into digital and print divisions, seeking to accelerate growth online while maximising profits from its legacy titles.

It has also expanded its footprint, buying Business Insider in a play to target financially savvy millennial readers in the United States and elsewhere after missing out to Japan’s Nikkei in a bidding war for the Financial Times.