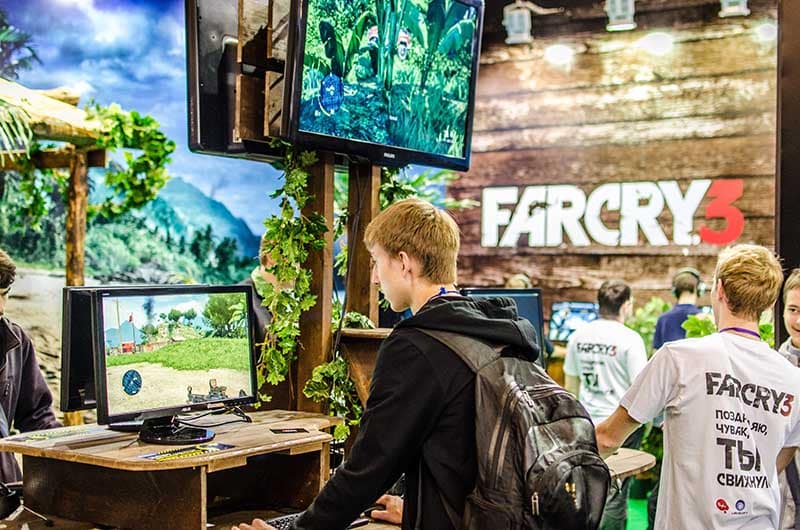 Ubisoft’s seminal free-roaming rampage simulator comes back for another swing. The action of Far Cry 5 is set in the heart of Montana. It’s the first time a Far Cry game has been set in the USA.

One of the definitely new features of the new Far Cry 5 are the allies you can recruit to your fight against the Seed family’s doomsday cult ruling the hope country now. There will be a bunch of characters to choose from, depending on your playstyle and mission type. There will be a sniper, a pilot providing air support, a more assault-focused companion…and a dog. The dog’s going to be a pretty handy companion, too.

For one, Boomer’s going to be able to freely walk around enemy bases to tag people to take down. During combat proper he’s going to harass your foes, and may even fetch you their weapons. That’s a good boy, yes he is.

Another feature we’ve never seen in an Far Cry game before is player character customisation. For the first time in the series Ubisoft will let us define the appearance of our avatar, down to gender and skin tone. Given that some of the previous Far Crys (Far Cries?) got us pasty twenty-somethings to play as, getting to create our own alter ego isn’t a bad thing.

Spinning off from the alter ego theme, the kind of character we’re playing also changes, verges slightly into the “licensed operative” territories explored in Ubisoft’s Tom Clancy-licensed games. Namely, instead of a dude randomly dropped into the thick of things, we’re actually playing as a deputy sheriff sent to cut short the mess happening in Hope County. What that means is that we actually have a business being where we are. It’s debatable if the badge of office is enough of a license to cause the traditional Far Cry wholesale destruction, but when your entire task force is down for the count and all you have are some disgruntled locals you have no choice but jump right into the madness that Far Cry 5 gameplay will expect of you.

It wouldn’t be a Ubisoft game if it didn’t shower you with activities in excess of the main storyline. Although Montana isn’t exactly an exotic locale like tropical islands or nonspecific mountainous countries, there will be plenty to do in the huge open-world environment.

For one, hunting comes back in full swing, since at this point it has pretty much become an essential part of the Far Cry experience. It’s unknown what bonuses it will unlock, but it’s good to know it’s back. If you’re more of a casual hunter, there will be fishing, too. It’s probably going to have its own minigame, because unlike with bears and cougars shooting fish with an assault rifle isn’t exactly useful, usually.

There are also going to be vehicles, because you need SOME means of getting around and the map isn’t going to be small, either. Far Cry 5 is going to have fully functional planes, allowing you to rain death from above, or engage in county-scale dogfighting, if Seed’s followers get planes of their won. Of course they aren’t going to be combat aircrafts, but crop dusters and the like.

Since the vague and surprisingly subtle announcement trailers we got a bunch more, showcasing individual resistance members, overall gameplay, or the voice actors for certain characters.
One of the latest trailers is like a recruitment vido for the Hope County resistance.

After several delays and a lot of silence, Far Cry 5 release finally settled on March 27th 2018. It means that Q1 of 2018 is going to close with a bang and the staccato of gunshots, which is a very good way to end one quarter and enter another.

Not too long ago Ubisoft announced the final system requirement for Far Cry 5. They look draining, but not exactly monstrous. Nothing like The Witcher 3 which demanded a relative Skynet of a PC for the time it was released.

Far Cry 5 is shaping up to be an interesting and engaging open world action game. With a large map, multitudinous activities, interesting premise, and a significant change of scenery, it is going to be as memorable as Far Cry: Blood Dragon or Far Cry: Primal were. Which is always good.

Over 2,000 police on duty during Sunday’s election

EC to convene on digital ID and data cloud