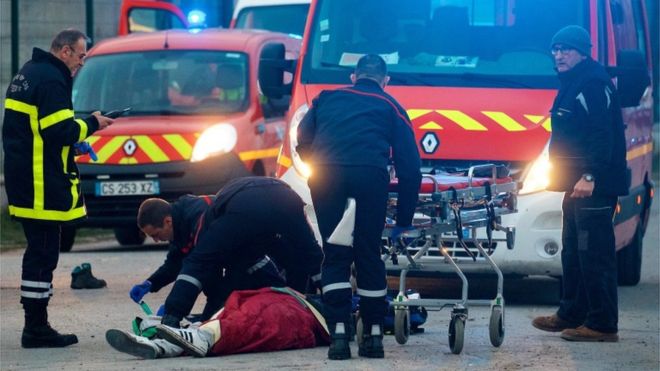 The French government will send more police to Calais to crack down on migrant gangs, the interior minister said on Friday, after gang rivalries erupted into a brawl that left five migrants suffering serious gunshot injuries

Thursday’s explosion of violence was a stark reminder that the dismantling of a sprawling camp in late 2016 had failed to halt the arrival of migrants in Calais. It came weeks after Britain promised millions of pounds in extra border control support.

Eritreans and Afghans fought running battles in broad daylight, some armed with rods and metal poles, television pictures showed. It was not clear who was armed with firearms.

“There will be people here at their wits’ ends faced with this increasingly violent presence among a certain number of migrants, who it is plain to see are organised in gangs,” Collomb told reporters after spending the night in Calais.

“We know there are gang leaders … and it is these networks we must dismantle,” the minister added.

Promising to ease the pressure on Calais, where Britain’s southern shores can be seen on a clear day, Collomb said that within two weeks the government would take over control of food distribution from local aid groups and conduct the handouts outside the town.

That, he said, would remove an incentive for the migrants to gather in Calais.

Francois Guennoc of the Auberge des Migrants charity told BFM TV that the government still lacked a coherent strategy. “Every time you arrest 10 people, another 10 fill the void.”

Collomb indicated the French government was concerned that hundreds of thousands of migrants would head to France after their asylum requests were rejected in other European countries, above all Germany.

He said half a million migrants, many of them people who had initially been allowed into Germany, had had their requests for asylum rejected.

“The situation’s untenable,” he told reporters, noting that France registered a record 100,000 asylum requests in 2017. Tens of thousands more had been turned around at the border, he said.

More asylum seekers in France came from Albania than any other country, according to official data. Collomb said that while Germany dealt with Albanian cases in several days, France took two to three years.