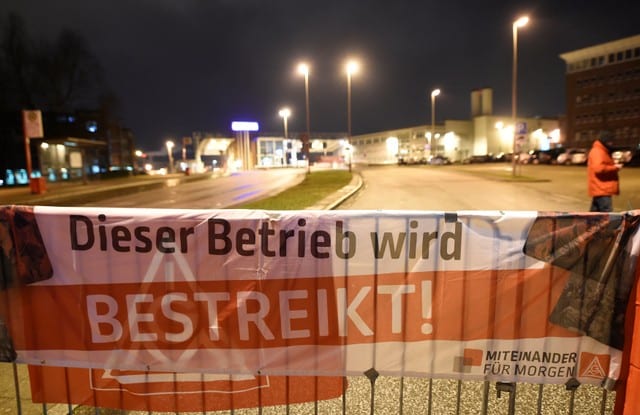 A banner that reads: "We are on strike" is seen in front of the main entrance of plane maker Airbus during the 24-hour strike of German Metal Workers Union IG Metall in Hamburg-Finkenwerder,

Industrial workers in Germany started a third day of 24-hour strikes over pay and working hours on Friday, downing their tools at companies including carmakers Mercedes-Benz and Porsche and airplane maker Airbus.

The full-day walkouts, which are due to end late on Friday, are labour union IG Metall’s last warning shot before votes are cast on whether to take extended industrial action that could cost German companies hundreds of millions of euros in lost production.

Both the union and employers have said they are open to resuming talks on Monday next week, but they have each insisted that the other side shows more willingness to make concessions.

The union has also asked for workers to be given the right to reduce their weekly hours to 28 from 35 to care for children, elderly or sick relatives, and to be able to return to full time after two years.

This is IG Metall’s first major push for a change in hours since workers staged seven weeks of strikes in 1984 to help secure a cut of the working week to 35 from 40 hours.

Employers have offered a 6.8 percent wage increase, but rejected the demand for shorter hours unless they can also increase workers’ hours when necessary.

They have also dismissed the idea that they should make up some of the pay shortfall for workers who cut their hours.

Nearly 200,000 workers at more than 100 companies including truckmaker MAN and carmaker Ford staged rolling 24-hour strikes on Wednesday and Thursday, according to IG Metall.

By the end of Friday, that number is expected to rise to around 260 companies.

The DIW economic institute has estimated the strikes could cost companies a total of 62 million euros ($77 million) a day in lost revenue, assuming around 50,000 workers, or on average 200 per company, stop working for one day each.

After three rounds of fruitless bargaining, more than 20,000 workers at VW’s core Wolfsburg factory had walked off their shifts for two hours on Thursday, staging the first warning strikes at VW since 2004.

Britain’s May gets 9 bln pounds in China deals

Fire at building site of palace in Berlin