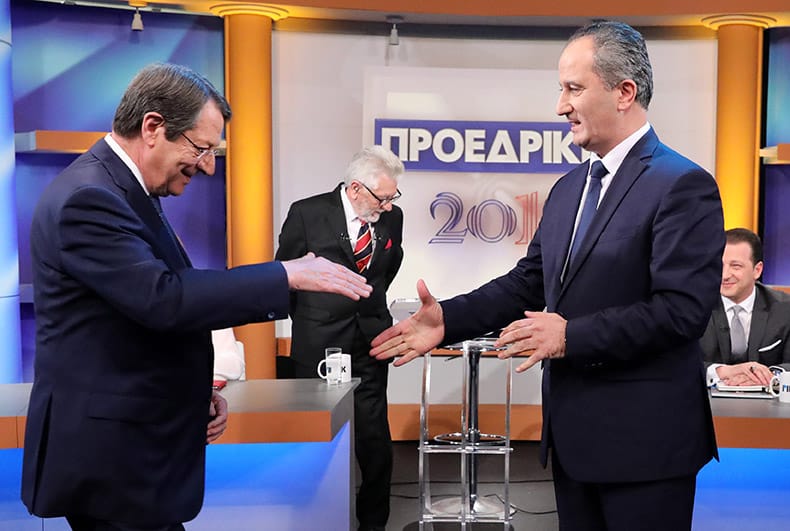 Which candidate will have the upper hand by the end of the day?

Just over 24-hours before the runoff election for the coveted presidential seat, barbs between the two camps were being traded in earnest whilst the two candidates, in their final attempt to convince the public, urged people to vote for the best shot at a good future.

President Nicos Anastasiades said on Friday, the stakes were never clearer and the choice was between policies that would keep the country’s development moving forward or “going back towards dogmatic policies which led us to the brink of bankruptcy.”

The incumbent said he recognised there were still problems within society but now that economic stability had been achieved, the next five years could be focused on resolving the consequences of the crisis his leadership was forced to deal with.

Akel backed independent candidate Stavros Malas, who is going after the presidency for the second time, urged the public to vote for change during Sunday’s vote.

Calling on ‘employees who struggle to get by every month, professionals worried about their work, young people struggling to find a job, or forced to accept a pittance of a salary’, to vote for and trust him, Malas pledged transparency and a free unified country.

The word ‘liar’ was tossed back and forth between the two camps after Akel general secretary Andros Kyprianou accused the government of knowing all along that Turkish Cypriot leader Mustafa Akinci had withdrawn the map he had submitted on territory during January 2017 talks.

His request was filed in July after Anastasiades withdrew his own proposals and consequently, the UN returned the map in December.

Kyprianou said that during Wednesday’s TV debate, Anastasiades called the fact that maps on territory had been submitted an achievement when he knew very well they were no longer on the table.

Foreign Minister Ioannis Kassoulides quickly got involved, saying the government knew only of the intention to return the map to Akinci – but not that it had been handed over.

Statements by UN spokesman Aleem Siddique that said ‘the Greek Cypriot side was informed of the intention to return the Turkish Cypriot map’, were quickly seized by Anastasiades’ camp who used the technicality to ask both Malas and Akel who the real liar was.

The president’s team accused them of trying to profit from Akinci’s ‘interference in the elections’ something the Turkish Cypriot leader denied on his Twitter account, describing it as an internal Greek Cypriot matter he had no part in.

On a different note, the much promised name of Malas’ finance minister, should he be elected will not be announced, due to a clause in the individual’s contract at the firm which employs him, a statement by the candidate’s camp said.

Reports suggest the man for the job is KPMG board member Anastasis Yiasemides, who, according to his profile, heads the company’s economics department ‘responsible for the microeconomic and macroeconomic analysis of the Cyprus, European and International economies.’

Anastasiades kept part of his promise he made earlier this week during the TV debate that he would make public the proposals he presented during the talks over the rotating presidency after he was challenged by Malas.

Instead he sent three documents to his rival but said they wouldn’t be made public due to “reasons of national interest.”

The documents were one submitted by the Greek Cypriot side on July 5, based on the UN Secretary-General Antonio Guterres’ parameters; the non paper presented by Guterres on July 6, and points by chief negotiator Andreas Mavroyiannis on how the president and vice president of Cyprus would make decisions.

“The President of the Republic chose for reasons of national interest to avoid publishing the documents. It is up to Mr. Malas, if he deems it appropriate, to make them public.”

Malas hit back saying that although the documents were received, the one on the issue of rotating presidency was not the original version but an analysis from the president’s office, filled with inaccuracies.

It also proved that Anastasiades had indeed brought to the table the veto power of the president and vice president, Malas said.

Meanwhile, Elam, which garnered 5.65 per cent of the vote during the first round, said they did not back either candidate.

‘I the citizen’ party, headed by Russian businessman Alexei Voloboev, publically announced its support for Malas.

Controversial theologian and former DIsy MP and MEP Andreas Pitsillides, resigned from the party and announced his support for Malas.

Our View: Poachers need to feel the full force of the law